The Constitution Day Celebration at School 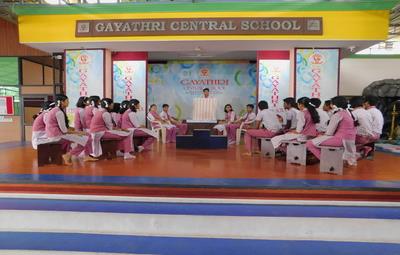 The Constitution of India is the supreme law of India. The document lays down the framework defining fundamental political code, structure, procedures, powers and duties of government institutions and sets out fundamental rights, directive principles, and the duties of citizens. It is the longest written constitution of any country in the world. Dr. B.R.Ambedkar, Chairman of the Drafting Committee is widely considered to be its Chief Architect of the Indian Constitution.

The Constitution Day or Samvidhan Divas is celebrated every year in India on November 26 to commemorate the adoption of Constitution of India, and it came into effect on 26 January 1950. Previously this day was celebrated as “Law Day.”
In order to celebrate and generate awareness among students on fundamental rights and duties preserved in the Constitution, we had a special assembly on 26th November 2019. 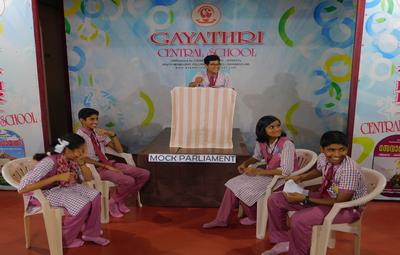 On that day a mock parliament was conducted by the students during the assembly. A bill was going to be passed regarding the usage of mobile phones for children below the age group of 15 years. The ruling party read out their proposal of imposing legal restriction on the use of mobile phone by children. They also listed out the advantages and purpose of imposing such a restriction. The opposition party after hearing the proposal burst out expressing their disapproval. They said that such a decision will be counterproductive. There were opinions from other members speaking for and against the proposal.
After hearing the opinions the ruling party gave clarity on the proposal and said that it is not a ban on the usage but restriction to enter into some unauthorized sites, download certain applications, and use certain application only with the official consent of their parents. The speaker then expressed her opinion on the subject, especially on the advantages of passing such a bill. The members are asked to vote for and against the bill. Finally the bill is passed with the support of the majority.
By conducting such a programme on Constitution Day, the students got an awareness of the strength and spirit of our Constitution.
The Constitution Day celebration in our school was a remarkable and memorable one in all respect. 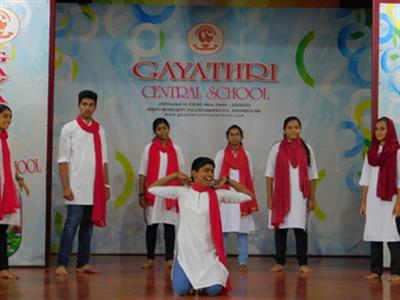 19th November, is celebrated as National Integration Day in India, as honour to India’s first women Prime Minister, Indira Gandhi, commonly known as Iron Lady of India. This day is the birth anniversary of Indira Gandhi.
National Integration Day promoting the harmony among Indian people who are different in terms of culture, multiple languages, religious geographical diversity etc. The importance of National Integration in any state is indisputably relevant because it helps stabilize the democracy, increase the economic growth, develop the nation and give people all vital rights and duties. India will make much progress if the spirit of Unity in Diversity is inculcated in her citizens.
As the part of National Integration Day, Gayathri Central School took the initiative to conduct a Street Play about unity. It is celebrated to encourage our students about the unity, peace, love and brotherhood among them. The students of Std.VIII participated in this activity.
Our students conducted the programme in an effective manner. 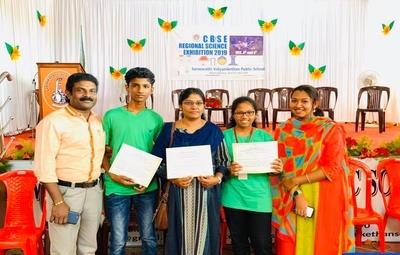 As per the circular sent by CBSE dated 17th September, 2019, a Regional level Science Exhibition 2019-20 was organised on 3rd and 4th of December, 2019.
The theme for the exhibition was
“Science and Technology for Sustainable Development with thrust on Water Conservation.”
The sub-themes were:
1. Sustainable Agricultural Practices
2. Cleanliness and Health
3. Resource Development
4. Industrial Development
5. Future Transport and Communication
6. Educational Games and Mathematical Modelling
7. Others
Accordingly the school registered the following students and the mentor teacher.
Student participants: Appu Sunil, X Coral and Karthu.S.Pradeep, IX Ruby
Mentor teacher: Mrs. Saritha .R
The subtheme selected was “Industrial Development.”
The works related to exhibition started during the last week of November under the able guidance of Pavumba Manoj Sir - Physics and Art teacher of Gayathri Central School.
The project selected was “Plasma Gasifier” which was a still model. The model exhibited how to produce electricity from the Non-biodegradable massive waste that is a threat to the society.
The still model “Plasma Gasifier” and the charts showing the working, Flow Chart and the products of the unit were ready by December 1st 2019.
On December 2nd 2019 the team set off to the venue school, i.e., Saraswathi Vidyanikethan where the Exhibition was to be conducted. The exhibition was conducted for two days i.e., on 3rd and 4th December, 2019.
The exhibit was displayed by the students on the 3rd December 2019. The exhibition started at 09:00am after an inaugural function. A panel of 3 judges belonging to different departments judged the exhibit. They asked several questions to the participants. Students were able to answer confidently.
On the second day i.e. on 4th December, 2019, a panel of 12 judges judged the exhibit and asked various questions to the participants. The C.D containing the presentation and the write-ups of the exhibit was handed over to the venue school.
In the evening the results were announced during the valedictory function. Three exhibits from each subtheme were selected for the National level competition to be held in Delhi on 16th, 17th & 18th January, 2020. At the valedictory function certificates were awarded to the participants and the mentor teacher.
Later the school felicitated the team during the assembly on the next working day. 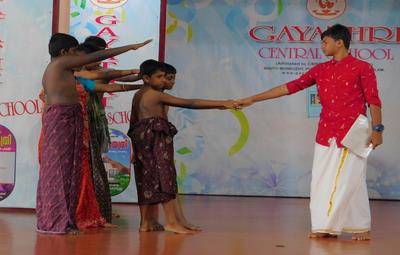 11th November, the birth anniversary of Maulana Abdul Kalam Azad, the great freedom fighter, educationist and the first Union Minister of education, is observed as the ‘National Education Day’ since September 2008.

National Education Day was commemorated in our school on 13th, 14th and 15th November. As a part of it, activities like Essay Writing Competition (Women Empowerment), Tableau and a Poster presentation were held. A rally with slogans was also organized by the students of Std. III & IV .

Around 135 students and 6 teachers participated in the Essay Writing Competition held on 15th November, related to the topic “Women Empowerment." The competition was held for the students of Std.V-VIII. G.K.Deepavarshini of VII got the First Prize and Famiya Jesly of Std.VII got the Second Prize in the competition.
A rally with slogans on the importance of education was organised on 15th November. Around 45 students and 7 teachers participated in the rally sloganeering the role of education in our life. Students actively participated in the rally.
The programmes conducted in the school conveyed the message that “Education is power and a key to success in one’s life.” 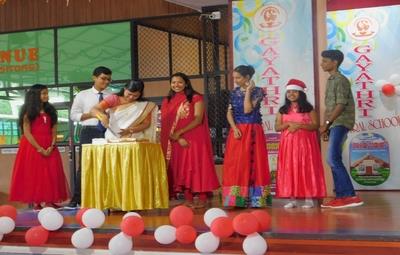 The Christmas Celebrations for the academic year 2019-20 was held on 20th December 2019 in the School Auditorium. The programme commenced at 08:30 AM and the curtain came down by 11:00 AM. The programme started with lighting of the lamp by our Chief Coordinator Aashna Ma’am and was followed by a prayer by the school choir. Appu Sunil of IX Coral rendered the Welcome Speech and Lekshmi Nandana of V Ruby conveyed the Christmas message. The Christmas Carol by the School Choir added charm to the function. Vote of Thanks was given by Zaina Dharvez Mohammed of IX Ruby. 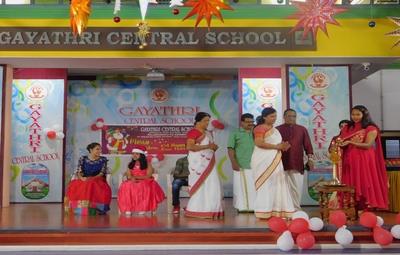 Cake cutting was done by our Principal, Leena Shankar and the illumination of X’mas tree was carried out by the programme convener Mrs. Bindu. R. Pillai. The arrival of the Santa with the carol group created a celebrative mood among the spectators. The results of the Class Christmas Decoration competitions which were conducted on 20th December were announced and trophies were awarded to the winners by Gayathri Educational and Charitable Trust General Secretary Mr. Jayasingh. C.

Variety of entertainments started at sharp 09.20am with ‘Asathoma’ by V-VII section students. All together there were 12 programmes. The competing for the programmes was done by Adil Zakir Hussain of VIII Ruby and Aditi Dileep of VII Gem. The programme came to its closure with the programme Thiruvizha (VIII-X). Audience was enthralled by the visual treat. Snacks (Appam) were distributed after the programme. Later students gathered for the games which they enjoyed a lot. 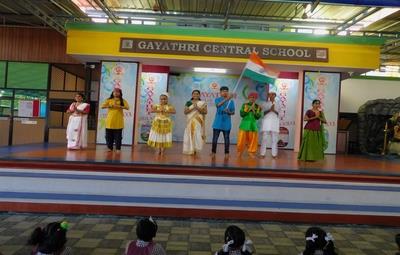 National Unity is significant for the construction of a complete nation with the aim of ‘One India Excellent India’ (Ek Bharat Shreshta Bharat). Sardar Patel was born on 31st October in 1875 in Gujarat. He was one of the founding father of Republic India.
Unity in diversity will always remain the prime pillars for the democracy of our vast nation and a key to its global success.
On the basis of National Unity Day, our school conducted a programme to make students aware of the Unity of India. Speech, Pledge, Group Dance & Essay Writing (Topic: Sardar Vallabhai Patel; Unity of India) were also conducted. In spite of different religions, customs, castes and languages our country has a strength of unity. Unity and love can lead our country to progress and harmony.
Sardar Vallabhai Patel, the former Home Minister of India used his strong determination, iron will and political supremacy to make the nation united. So he is known as the ‘Iron Man of India’. His birthday 31st October is celebrated as National Unity Day.