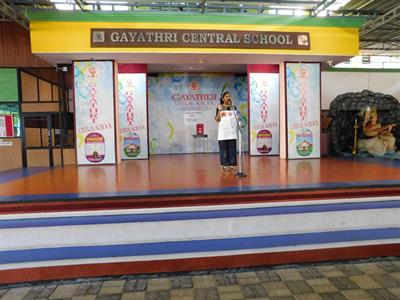 National Postal Day is observed on 10th of October every year to commemorate the role played by the Indian Postal Department for over 150 years.
Indian Postal Celebration is an extension of World Postal Day, which is celebrated on October 9, every year.
The Postal Day celebrations in Gayathri Central School began with a Seminar session on Philately, conducted by the department heads from the Head Post Office, Kayamkulam. A skit was enacted during the school assembly by the students of  Grade V-X, which accentuated the importance of Indian Postal Services.
Students from Grade III-X were given an opportunity to draft and send letters, which helped them to revive and remember the old medium of interpersonal communication.  Students were also assigned to send letters to their friends and family members.
The event was aimed at re-introducing the future generation to the living heritage of the Indian Postal System and was indeed proved to be a great step to revive the fallen glory of the art of writing their minds and sharing their emotions through the post. 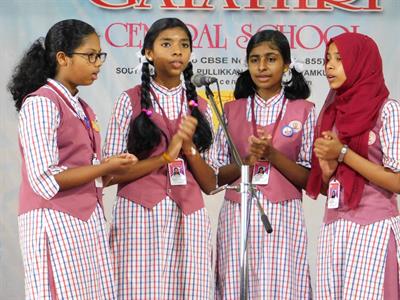 In our school, as a part of Sanskrit Day on 19.09.2019, Thursday we conducted a special assembly. Adwaith A. Pillai of V Diamond presented the ‘slogans’ from Bhagavatgeetha. A speech was delivered by Akshara Parvathy of IX Ruby on the topic “Importance of Sanskrit’ and recitation recited by Nandakishore Varma of IX Diamond.
Through the programme conducted students got awareness about the importance of Sanskrit. 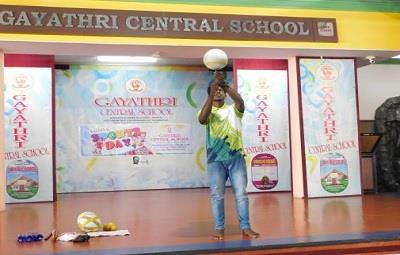 Thursday the 29th of August 2019 - the day celebrated as the ‘National Sports Day’ as it is the birthday of the legendary Indian HOCKEY BADUSHA- Dhyan Chand.

In connection with the celebrations, the school morning assembly started at 08:30am.  Firstly, the school choir was on stage with the Prayer Song. Then, a pledge was administered to the children by R. Arun of V Gem.

Next it was turn of the Principal to give a brief introduction about the day and its importance, especially on National Sports Day, followed by a speech by G.L.Malavika of X Coral, that too, in connection with the National Sports Day.

Next event on stage was a Cricket Slow Motion Programme presented and enacted by the students of Std.IX, the participants being Adinath, Vaishak, Sooraj, Rufus, Allen Easso, Devanarayanan and Gokul Krishna.

Next the Vice-Principal had the privilege to invite the Chief Guest of the day Mr. Hari Kumar. S, the popular Sports personality and the Asian Record Winner in Ball Balancing.  He presented and performed an interesting ‘Ball Balancing Programme’ that lasted for long twenty (20) minutes which was an engaging and enterprising entertainment as well as an exercise, both physical and mental, for our children.

As a sequel, in appreciation of his presence and committed performance, he has honoured by the School Principal by presenting him with a memento.

The celebrations came to an end with the National Anthem.

Fortunately the day was coincided with the proud launching of ‘Fit India Movement’ by the Hon’ble Prime Minister of India, at Indira Gandhi Indoor Stadium, New Delhi from 10:00 am to 11:00 am; and the students from Std. VIII-X had been taken to Gayathri Vidyamandir auditorium to be present there to view the live telecast of a fitness pledge administered by the PM himself. The stage was set, the students were taken to the site, and after watching the telecast, the students were sent back, escorted by the  in-charge  teachers to their respective classes.

Every year on 5th of September we celebrate Teachers Day as a humble tribute to Dr. Sarvepalli Radhakrishnan a visionary statesman and a teacher par excellence.  Our school organized a special programme on this occasion during the assembly. Students of Std. III to Std. X participated in the programme.  A wonderful skit was presented by the students as a tribute to the teaching fraternity. The students received the blessings of all the teachers. The programme was anchored by Varsha Vasanth of Std. X Coral. 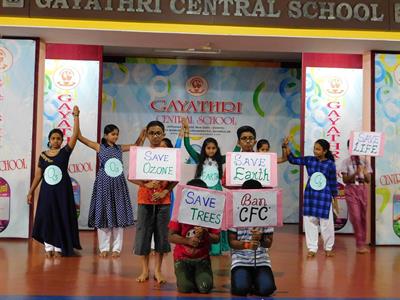 World Ozone Day is observed on 16th September every year.  This day is meant to raise awareness about the importance of ozone layer and how its depletion is leading to global warming and climate change across the world.  Seminars, speeches, exhibitions etc. are organized to bring awareness among the people.
In our school, World Ozone Day was commemorated on 18th September, 2019. A skit was organized showing the importance of ozone layer.  Students played the role of earth, ozone layer, ultraviolet rays, sunlight, chlorofluorocarbons etc. It also displayed how chlorofluorocarbons affect the ozone layer and the effects of the penetration of UV rays. A poem was recited at the end of the skit related to ozone layer.
Through the programme conducted, students got awareness about the need to protect ozone layer and the factors that lead to ozone depletion which may cause several health issues and other problems. 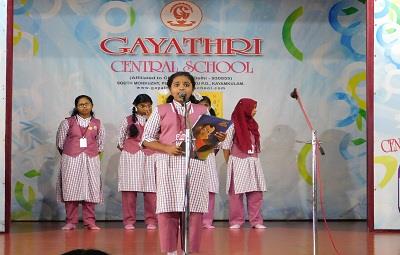 Hindi Diwas is celebrated all through the India to show the importance of Hindi language in the country.  After being an independent country, the Government of India made a goal to standardize the mother tongue (i.e.) the Hindi language with Grammar and Orthography. Devanagari script is used to bring uniformity in writing. It is celebrated as an event every year on 14th September as Hindi language (writing in Devanagari Script) was first adopted by the Constituent Assembly of India as the official language of Republic of India on 14th September.
There is an enormous need to celebrate Hindi Diwas as an event every year in order to pay honour and pass its significance to the next generation. Hindi Diwas should be celebrated not only because it is our national language, but it is also our mother tongue, which we must respect and commemorate time to time. We should be proud of our national language and never feel hesitated while speaking Hindi in other countries. It is an event which gives opportunity to Indian people to promote Hindi language. It motivates and brings positive perceptions about Hindi among others.
So Gayathri Central School took the initiative to conduct the program on the importance of this day. The program was conducted by the students of III-X in an effective manner.
Anchoring: Krishnaa Sankar, VI Diamond
Speech: Jiya Byju, VI Gem
Recitation: Ayisha Thahaniya, IV Ruby
Recitation: Akshara Parvathy, IX Ruby
Group Song: Dhashina Shiji, VII Diamond
Angel Babu, VII Diamond
Aparna Anil, VII Diamond
Famiya Jesly, VII Diamond
Devan S. Pillai, VII Diamond
Hanan J. Mansoor,VII Diamond
R. Abhijith - VII Gem