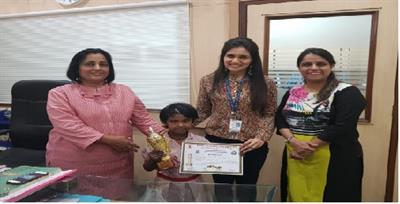 Ø Tanishka Sagar of grade VII B and Tanishq Sharma of grade VI A had a sweet smell of victory by getting selected to play in National Championship for shooting to be held at Ahmedabad. The infinite talents have glorified the name of school to be embarked in the glided pages of victory. The brilliant stars unfurled the flag of triumph by winning state shooting championship held at Dr. Karni Singh Shooting Range from 23rd to 28th July. 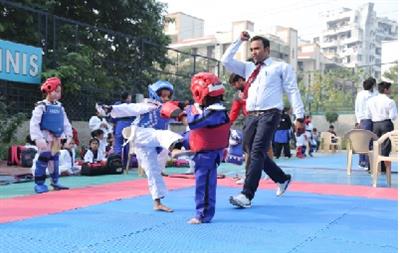 “A bird in elation fluttering her wings,
Moves around in full swings.
All hail for her victory,
For she is subject to Liberty.
GBN is a place where girls are empowered,
Robustness and Individualism are showered!!”

GBN Sr. Sec. School’s aim has been to nurture each and every student and make them civilised. We aim to polish individual skills and bring the best out of them. One of our foundations has spread its roots and is a blooming flower now. The vibrant flower is taking a step towards freedom of girls and empowering them to stand like a pillar of strength. GBN initiated an enormous step by giving self-defence classes to girls in order to make them powerful and mark their place in the globalised world. Safeguarding oneself is the essence of what GBN strongly believes in. Self-defence training will assist girl students to become aware of the surroundings and not to feel helpless in any situation. We believe in creating next generation which would perhaps be our creation. GBN Sr. Sec. School strongly believes in tapping their reservoir of knowledge by exposing them to multiple conditions.

It all began in year 2015 when GBN Sr. Sec. School laid foundation stone of Inter School Girls Taekwondo Championship. The revolutionary step taken by the school has added yet another feather to GBN’s cap of victory as it was appreciated by many. Eminent schools take part in this competitive championship which provides a good exposure to girl students. It not only boosts up their self-confidence but also makes them mentally strong. We have successfully climbed the ladder of success and now we are heading towards the 4th Inter School Girls Taekwondo Championship to be held on 27th January 2018. Save the date as it will an enthralling as well as memorable event wherein dexterous girls will be swirling their moves and exhibiting their skills amongst the rest.

GBN organised 4th GBN Inter-School Girls Taekwondo Championship. School Director Mrs. Anita Sood and School Principal Mrs. Leela Govind engraced the occasion by inaugurating the ceremony. GBN School has taken this stupendous initiative of providing free Self-Defence classes to its girl students in order to make them future ready. Girls displayed brick-strong performance and undying attitude to overcome any odd blocking their way to Dream-Realisation. 255 girls participated in this Tournament from 18 esteemed schools of Faridabad & Delhi. The victorious moment came to a freeze when GBNites stood as winners 'Team Champion' for the 4th time in league bagging 20 Gold  Medals. Grand Columbus was the 1st Runner-Up by bagging 19 Gold Medals. MRIS, Sec- 21 C turned out to be the 2nd Runner-Up. MVN Sec- 88 was awarded as the Best Disciplined Team, Grand Columbus was the Winner of Self- Defence Demonstration. GBN turned out to be the 1st Runner-Up in Self- Defence Demonstration, DAV School Sec-37, was the Second Runner-Up in Self- Defence Demonstration.

The 2nd Inter-school Chess Competition was organised by GBN Sr. Sec. School Sector 21-D Faridabad. Eminent schools of Faridabad participated with 150 students in this two-day chess competition. Tournament was a compelling and outstanding experience for every child that participated. The ambience for those two days was full of dynamism, spirit of winning and endless love for the game of Chess.  All the players were charged up for their game rounds and they did not let their energy get down till all 5 rounds that took place.

Chess is indeed a sport that helps children to do a thorough analysis, research, and assessment of the situation before making any decision. Such an exercise provides mental clarity to the child, which helps him in his overall development. The sound of silence as bright young minds battling it out over chessboards made chess so special and exciting for them. There was no other school experience like an interschool chess tournament. The Chief Guests for the special day was Ms. Mary Mashi D.S.O Faridabad.  There were 4 categories divided into the Boys and Girls under the age of 10, 12, 14, & 16 respectively. The game was played by the FIDE rules. There was individual competition for all the players. The winners were handed over certificates and medals at the end of the competition. The trophies and certificates were given to all the winners in the first 3 positions in all the 4 categories. Certificate of participation was given to all the participants.

It was a great weekend spent by the students who took away the trophies, and participants who took away a great lesson and vow to play and win the next tournament. After all, Chess is the gymnasium of mind and “No one has ever won a game of chess by taking only forward moves, sometimes you have to move backwards to take better steps forward”.