The school celebrated Nursery Graduation on 27 February, 2019 amidst fun and frolic. The school Principal Ms. D.K. Dhingra accorded a formal welcome to the guests. The occasion was graced by Chairman GHPS India Gate, S. Amarjeet Singh Pinky, Manager S. Bhupinder Singh Bhullar and other dignitaries. The Tiny Tots dancing on their dainty feet mesmerized one and all. The Punjabi play Swachh Bharat Mohim brought home the message spread by our 7th Guru, Guru Har Rai Ji on the importance of cleanliness and hygiene in our lives. The Grand Finale was in the form of ever enjoyable Bhangra.

International Mother Language Day was celebrated on 21st February, 2019 to promote the dissemination of mother tongues and future awareness of linguistic and cultural traditions. Poems in three main languages- Punjabi, Hindi and English were recited by the students in the morning assembly. Teachers delivered talks on the importance of mother tongue and encouraged the usage, not only of the respective mother tongue but also other Indian languages. To inspire solidarity based on understanding, tolerance and dialogue, the school Principal Ms. D.K. Dhingra laid emphasis on the learning of languages and their own mother tongue. Slogan writing competition was also organised during the day.

Constitution 870 campaign was organized in the school during the second week of February 2019. This was done under the aegis of Directorate of Education in order to connect the students with the values covered in the constitution of India particularly frames in its preamble so that they can acknowledge and imbibe them in their everyday life and become politically aware and empowered citizens of India.

GHPS, India Gate, Principal, Ms. D. K. Dhingra conferred with GURU DRONA AWARD-2018, for her valuable contribution in the field of Education in the Principal’s Conclave held at  Metropolitan Hotel on 14 December 2018.

As per the directions of the Directorate of Education, Delhi, Mock Drill on DM was conducted in the school premises on 29th November, 2018.

The children were given experience to evacuate the school premises in case of emergency (like Earthquake) with in a very short span of time in a well-planned manner. Accordingly the mock drill started with a first siren, thereafter the children went under the classroom tables. On the second siren children evacuated the school premises and gathered in the designated areas on the ground floor. During the mock drill, care was taken that all exit routes were kept clear of any obstacles and proper signage with appropriate arrow marks like exit, entry, emergency exit, assembly point were displayed in the evacuation plan. The teachers and office staff also came out with the students and head count was conducted.

The building was evacuated in the shortest reasonable time. The mock drill was successful. 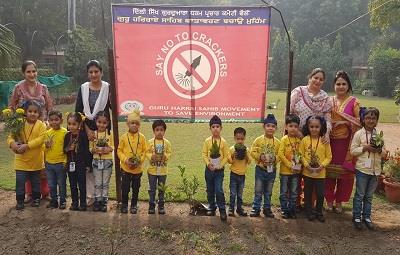 The primary segment of GHPS India Gate was instrumental in spreading the message of green Diwali in the entire School. The little ones brought small plants and exchanged them with each other. They named the plants and advised their friends to nurture them lovingly. They also pledged not to burst crackers and make this Diwali pollution free Diwali. The students went around the school calling upon their friends to celebrate a green, safe and pollution free Diwali.