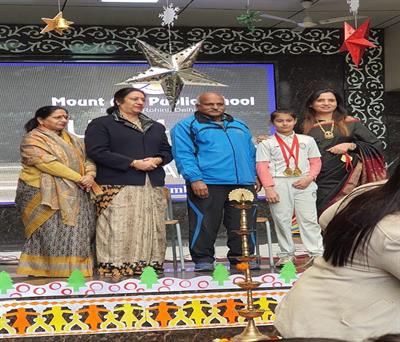 Avleen Kaur, a nine year class V student of Gyan Mandir Public School has set a record in cricket while playing under 14 Cricket Tournament organized by Mount Abu Public School, New Delhi on 21.12.19. She scored a total of 58 runs in 3 matches, took 4 wickets  by giving 16 runs  in just 6 overs and  remained not out throughout  the series. A budding cricketer Avleen, wants to achieve more and prove herself.

Under 14 basketball tournament at Gyan Mandir 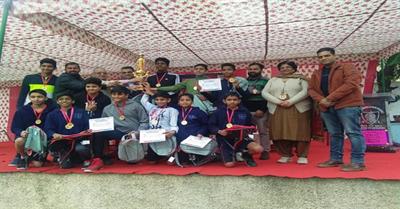 Gyan Mandir Public School organized the First KG Khosla under 14 Basketball Tournament in the school premises. About eight elite public schools of Delhi viz. Manav Sthali, Gd. Goenka, St. Marks and Airforce to name a few put their best foot forward to prove their sporting spirit. The event was inaugurated by members of the Managing Committee, Principal, coaches and captains of the teams by lighting the ceremonial lamp . The tournament was for under 14 players but the way the players played was amazing. The budding sportspersons displayed their winning spree and proved their mantel. The referees Mr Kartik Karki, Mr.Tushar Khanna and Mr. Rishabh Thakur had a tough time while judging the matches. The strength, courage and talent of the players was really commendable. The semifinalists included Gyan Mandir vs GD Goenka from pool A and Airforce vs St. Marks from pool B.It was a jaw breaking match between the selected teams .After the fantabulous match the finalists emerged as GD Goenka and Airforce. Finally the Air force School won the tournament and walked away with the trophy.

Gyan Mandir Public School has hosted CBSE Central Zone Taekwondo Championship from 24 September 2019 to 27 September 2019 under the guidance of Shri Harsh Priya Singh (CBSE Observer) and Shri Subhash Mittal (CBSE Technical Delegate). 251 schools with 1485 participants registered for the above-mentioned championship from all over Delhi. Out of 1485 participants, 874 participants appeared for the championship. The championship was categorized in Under 14 Girls and Boys, Under 17 Girls and Boys and Under 19 Girls and Boys respectively. The Opening Ceremony took place on Tuesday, 24 September 2019 with the benign presence of Shri Kuldeep Vats (President Delhi Olympic Association), Dr Surinder Bhandoria (DDE West Zone) and Ms. Deepika Sehrawat (International Taekwondo Player). SMC President Shri Deepak Khosla welcomed the Chief Guest Shri Kuldeep vats with a planter and a Stoll. After the official welcome of all the dignitaries, Shri Kuldeep vats ji, addressed the audience and motivated the young players to give their best in the championship and play the game in the true spirit of the sportsmanship. The four days championship was officiated under the authentic officials appointed from Delhi Taekwondo Association and no controversy occurred during the championship.

All the gold medallist as well as silver medallist of the championship has been qualified for the CBSE National Taekwondo Championship being held at St. Xavier's school Balrampur, Uttar Pradesh from 19 November 2019 to 24 November 2019.