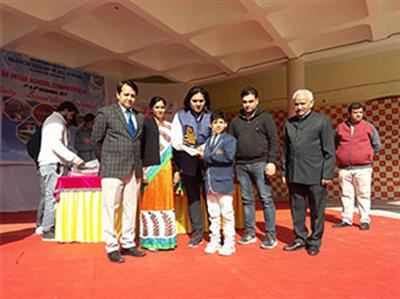 Rainbow English Sr. Sec. School, Janakpuri, New Delhi, held its 12th Annual Inter-School Competition 'INFINITY' on 7th and 8th December. Many diverse and futuristic competitions were organised under this event by the school management. The presence of various eminent personalities was witnessed by the school. More than 45 schools and 200 students have shown utmost interest in the event.

The enthusiastic spirit of participation among the various schools was also appreciated by the school management. On 7th December, Product Mania (create, advertise and sell) competition along with English Declamation Competition were held. Both the competitions witnessed the presence of Mr. Krish, an upcoming model, hairstylist, and cinematographer, in form of Cheif Guest of the day. On 8th December, Movie Making -Movie-o- utsav , Solo Dance Competition- Dancesations and Painting Competition- Artofest were conducted. Ms Bulbul ( Great Khali's sister) , first woman wrestler from India and Captain Aditya Verma, Master Mariner - Merchant navy enhanced the glory of the day with their presence . They boosted the spirit of competition among the students and uplifted their morale with their blessings. The winners of various competitions, on both the days were awarded with mementoes, certificates as well as cash prizes (First prize- Rs. 1500, second- Rs. 1000, third- Rs. 750 and consolation- Rs. 500). All the Guest Schools received Participation Trophy as a token of appreciation. The winners of all events were highly appreciated by the School Management.