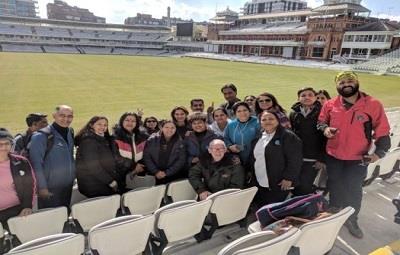 The programme was sponsored by British Council and conducted in Lords,London from 21.03.2018 to 24.03.2018.The pilot programme was attended by Mr Manjot Singh Matharu and Ms Rekha Batra.

There were 9 selected schools of India : 5 Public and 4 Government schools,who were part of this pilot project.The teachers visited Burntwood School,London and were engaged with stakeholders in relation to Royal Academy of Dance, programmethat was delivered in partnership with MaryleboneCricket Club.  The 4 day programme was a training of teachers to create a new dance form integrating skills of cricket and dance. Therafter, teachers had to train a group of 30 students in their school, imparting the skills learnt in the training programme.The duration for training students was two hours  per week for 63 weeks,Members of MCC visited the school  on May 2,2018 to observe the outcome and success of the programme.

The programme aimed to bring about gender equality through cricket and dance.

During the Training, the teachers were well looked after by the British Council. They stayed in Danubius Hotel, Lodge street,London. Ms Reesha, British Council Head for the project accompanied the group to London,U.K. 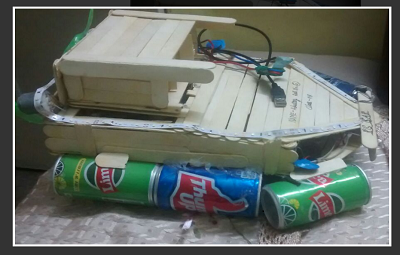 The project Hover Car flies at a constant altitude of up to a foot above the ground which can serve as a very useful method of transportation for the fisherman and it can also used as personal vehicle.

Scientific Principle Involved:Principal--  action and reaction for water and on land the principal is mechanical energy,hover car is a personal vehicle  and is used for personal transportation in the same way as the modern automobile is employed. It usually appears in works of science fiction. The closest real-world devices are the hovercraft, which elevates itself above a water or level hard surface using a cushion of air retained by a flexible skirt, and the hover train, which is a type of high-speed train that replaces conventional steel wheels with hovercraft lift pads, and the conventional railway bed with a paved road-like surface, known as the "track" or "guideway".

Construction:Its basic structure is made using ice-cream sticks which are joint together in a certain pattern using glue. I have used multiple electric motors as an engine.Arduino Uno is  used which is calibrated with the motor and hc05 for making  blutooth controlled. Small sized LEDs of different colors are used as head lights and tail lights.

Working: As mentioned above engine “the electric motor” is used for powering the vehicle. The vehicle is blutooth controlled all the steering controls and Forward and backward controls mounted on the phone.  This vehicle is back wheel powered, For the movement on water, ‘Pepsi cans’ are attached as they can easily float on water. These cans are sealed using water proof material so that air can retain in cans and prevent water lodging.There are fans attached at the back side of car with two dc motor that provides the thrust to the car for moving forward and backward.

FUNCTIONS OF THE CAR

. I have used automatic brightness control so that if a car is coming infront of us and both headlights are on then they will automatically decrease our headlight brightness level so that other car is able to see us and it will help in preventing the accidents.

. The car is blutooth controlled.

. I have used the RFID for the door locking system of the car so that we can just swipe the card In front of the door scanner to unlock it,and the card will also be used for starting our cars engine without using a key.

. I have also used an gas sensor system with a lcd screen in my hover car that helps us in, like suppose in a car if any gas is leaking from our car the gas sensor will smell the harmful gas and And tell us by giving a higher value in the lcd screen that is attached infront of us.

. I have also used an alcohol detect system, it will stop the the car if the driver is drunked and it wi  help in preventing the accidents.

Application: The Project, though can be used by anyone, is primarily targeted for the fisherman, who frequently travel on both land and water. Although at present the project is in prototyping phase, in future its existence will change the scenario of transportation on both land and water making the lives of many fishermen simpler and easier. 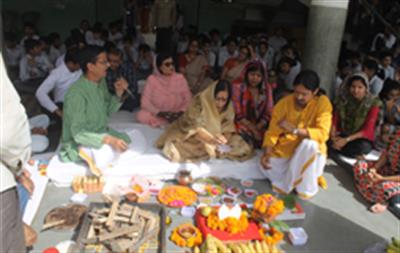 On the eve of an auspicious day (Akshaya Tritiya), the management of Ramjas School R.K.Puram organised a ‘havan’(sacrificial offering to the fire god) for the welfare of the students, the teachers and the management. Any good deed done on the Akshaya Tritiya day is believed to increase its fruits manifold. Being the beginning of a new academic session for all the students, the blessings of the almighty was invoked through the havan.

The Principal led the havan from the front, ably assisted by the rest of the staff. All the students were present, along with their respective class teachers.

The havan instilled a sense of confidence and enthusiasm amongst the students and the teachers, who look forward to a new academic year with great ardour and zest. Upon the successful completion of the havan, the ‘Prasad’(devotional food offering) was distributed to every student and staff member. 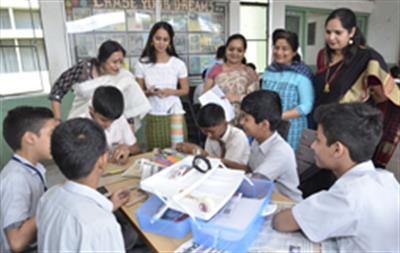 Ramjas school R K Puram celebrated Atal Community Day on 14 April, 2018, by commemorating Dr. B.R. Ambedkar's birthday. Staying true to Dr Ambedkar’s philosophy and ideologies, Ramjas School R K Puram opened up their Atal Tinkering Laboratory (ATL) to all surrounding schools as well as local NGOs in order to give an opportunity to students who don't have access to these facilities.

The chief guest for the day was Dr Ayesha Choudhary from Atal Innnovation Mission- NITI Ayog. School Principal Mrs Rachna Pant and Dr Ayesha Choudhary interacted and encouraged the children to think differently about problems, introducing them to the world of technology innovation and unlocking their innovative mind at a young age

Various activities such as Newspaper Building, Scratch games, Mechanical kit building were conducted .Students were divided into mixed groups for all activities. The concept behind this was to bring the students to interact with other students from different backgrounds and thereby, create an atmosphere of empathy and an environment where the schools and the associated NGO –benefit from the exchange

Students got a chance to work with tools and equipment to understand what, how and why aspects of STEM (Science, Technology, Engineering, and Math).

The program was a huge success in meeting its objective and was very well appreciated by Dr Ayesha Choudhary and the participant schools. Students from all the schools were highly motivated and are looking forward to more such future associations. 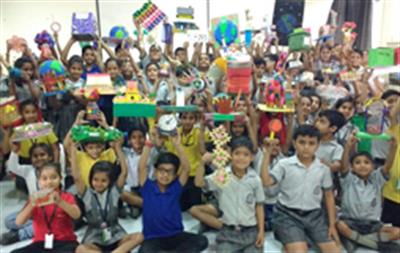 On the prosperous occasion of the Earth Day, Ramjas School, R.K. Puram from the courtesy of the Eco club and some students of class 10 organized a special function to nurture and spread awareness among the young minds about the theme of ‘End Plastic Pollution' this year. The students organized several interesting competitions as well as some unique programs to make the young youth understand the importance and relevance of the Earth Day. The function started by imparting knowledge about the significance and history of the Earth Day celebration. After imparting the knowledge about the significance of the Earth Day, the results of the competitions were announced first of which was the Best out of Waste competition which was organized  to encourage the students to show their creativity and enhance their skills to make something innovative with some common yet eco-friendly materials which we think is a complete waste. Keeping the theme in mind the students also had a poster making and poetry competition. The students made magnificent posters depicting the ways to end plastic pollution. Poems were also recited both in English and Hindi to make the students realize the real importance of Earth Day. When anything is depicted by a picture or presented in an audio format, it leaves a deep impression in our minds and influence our soul to work for a good cause. This was followed by a skit with comical representation in a healthy manner by taking up a real-life situation which had the main theme of a plastic devil  giving a message as well as scaring the students not to throw plastic anywhere. The students by enacting the skit left a very influential and deep message about the disadvantages of throwing plastic. Last and the most important was the tree plantation ceremony which actually depicted our pledge to save mother Earth and influence the future generations to plant more trees for human survival.

This year’s Earth day celebration had everything in it. After the eloquent and persuasive posters had a  diverse  influence as an act of  scintillating slogans  and catchy cartridge sketches shaped a new vision for the future, it was now the turn for the little ones to show what they had. Their creative craft work from simple waste materials to an unimaginable miniature piece bolstered their ideas for nature and usable things build up from rags and plastics stood outspoken for everyone-The best out of waste competition results were declared and the winners- the little ones were  bestowed with cash prizes. Class X students were also given the golden opportunity to visit TERI - TATA ENERGY AND RESEARCH INSTITUTE, India's first sustainable building as a part of the Earth Day celebration's educational excursion trip . They presented a short report on their visit and the sustainable and energy conserving methods used in the TERI building. 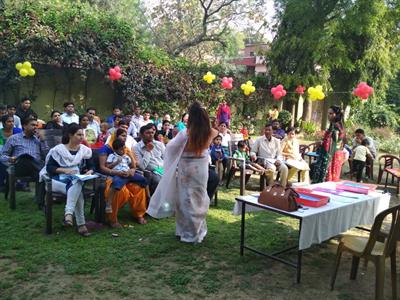 Ramjas School, R.K. Puram organized an orientation programme for the parents of Grade nursery on 3rd April, 2018 in the school lawn. The aim was to familiarize the parents as ‘partners in progress’ with the curriculum, rules and regulations of the school, teaching methodologies and the co-scholastic activities.

The session started with a welcome note by respective class teachers.Parents were briefed about the various forms that are required to be filled.

The teachers gave an overview of the co-scholastic activities which provided the parents with an assurance that our curriculum involves hands-on learning activities which not only are a vent to the creative talents and energies of the children but also help in their all-round development.  The respective teachers gave detailed information about the learning parameters and stressed upon the innovative teaching and learning methodologies followed in school.

While addressing the parents, all nursery teachers emphasized that nursery follows  creative curriculum which offers children plenty of opportunities to exhibit creative behavior. Such a curriculum will emphasize on independent learning, self–initiated projects and experimentation. Today’s children must be given the chance to develop their creativity to the fullest.

The orientation programme was  ended on a good note with an aim of growing our children into happy, skillful and creatively well- adjusted citizens.