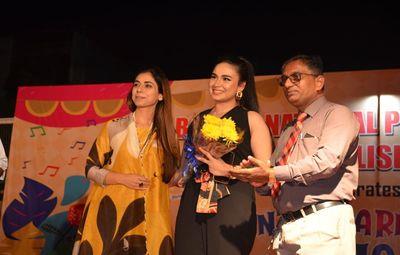 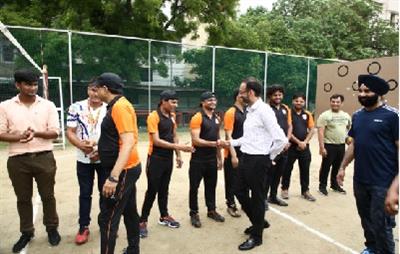 BNPS was privileged to host the Three – Day CBSE Foundation Day celebrations (26-28 July, 2019). Some of the main events held within the premises of the school, organized for the CBSE officials and staff were – Kabbadi, Volleyball, Cricket, Badminton, Table-Tennis, Athletics, Swimming, Song and Dance, headed by Dr. Manjit Singh, Deputy Director, Academics & Sports.

With the Election fever gripping the nation in the four corners of the country, and as  the run-up for the Prime Ministerial candidature reaches the feverish pitch, here at the BNPS campus, the scene was similar!

After the herculean task of nomination, campaigning and selection, the process to democratically elect the Student Council came to a resounding culmination! The students were engaged enthusiastically in voting for their favorite students to contest for the various posts. Unlike the past, when the Headboy/Headgirl”  were selected, this time the Election process was more democratic in nature and transparent, making the children more sensitive and responsible! The entire process involved training and nurturing the students to take up responsibilities as efficient, future leaders! 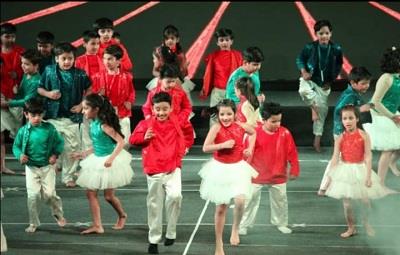 On 24th November, Bharat National Public School was filled with enthusiasm and talent as on this day the Annual Event was held in Yamuna Sports Complex and the theme was 'HARMONY' which means peace and happy surroundings without any conflicts.This event was filled with many joyful performances by class 6th -12th students.

This event was started by introducing the stars of BNPS, the  toppers of class 10th and class 12th Board Examinations, moreover achievements of students made by children in 2017-18 were also showcased. After that to give a harmonious start to the event there was lamp lightning by Mr. Kanwaljit Khungar (The Principal), Mrs.Pashmina Ma'am (The School Coordinator)and Mrs.Arti ma'am (Principa l- HES), with shlok sung by Priya Ma'am and. after this beautiful start the stage got on fire with quawali "Duma dum mastkalandar " by students of Priya ma'am and Vinay Sir. After this mesmerizing qawali the orchestra group took over the stage and made their place in everyone's heart with their fantastic performances.

The beauty of the event was increased by the chief guest Mr. JP Sharma who was also honoured by the Principal Sir. Then one of the most important things that is the new  website of BNPS was launched by our respected Principal Sir in addition to this he also told about the solar panels introduced in school.

The play - " Toba tek singh " Took over the stage and gave a killing performance which looked as if  we were not seeing an act but we are present at that place. After their superb performance there was an energetic dance on song dilbaro.

Now the most awaited moment took place and that was the "Fashion show based on the  themes - vintage, fairytale and mismatch. Along with fashion show dance performances were taking place in between which made the audience more enthusiastic and joyful. Then came the most important part of the event for which class 12th students put their heart and soul to win this tag and the tag is of Mr. and Ms. BNPS, in which Mr. Jugraj Singh Sidhu and Ms. Rishita were the ones who were fortunate enough to win the titles. Along with these tags there were many more tags like - best attire, best walk, etc which were given to some children from each theme.

This event is nothing without volunteers, staff members teachers and students so in the end all of them were appreciated and thanked for their efforts to have made the event smooth and memorable. 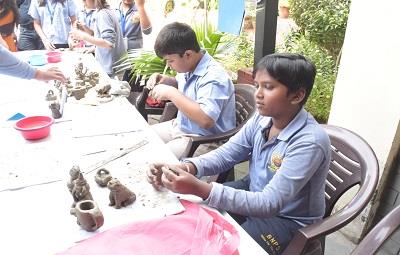 “Not marble, nor the guided monuments
Of princes, shall outlive this powerful rhyme.”

It is beautifully expressed by William Shakespeare that neither marble nor monuments, nothing will sustain but his work of art.Any form of art is eternal that lives forever in the hearts of people . Similar masterly works made by the budding artists of our school were seen on 6th October.Their hard work was wonderfully presented by the art department which effortlessly enhanced its beauty.
Starting from the funky umbrellas with hanging monkey faces, masks, butterflies made out of waste material to all the paintings, sketches as well as things made up of clay, turned the whole reception into an art gallery. Who could have thought the newspapers which we throw without giving a second thought can be turned into stylish bags or a Jamini Roy's painting could be made out of the vest. Each and every piece of work spoke its own language and the reason for its existence.It was difficult for the parents, teachers and students to miss even a single thing since it was so divine. A performer is nothing without an enthusiastic audience.This stood true when the tiny-tots were enthusiastically gazing at the displayed works.Not even a single corner of the reception was left blank.Every student was eagerly looking for his/her artwork out of all the masterpieces. And the joy after finding it touched the sky. This exhibition not only motivated everyone to bring out the artists in them but also enlightened everybody's heart with its colourful vibes! 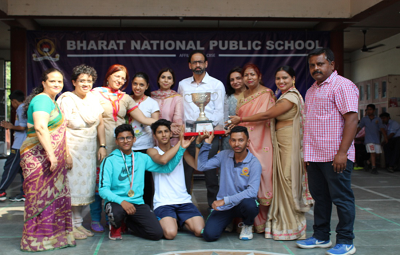 The much awaited 5th Annual Inter House Athletics Carnival was held on Saturday 13th October 2018, with great zeal, excitement and frolicsome atmosphere. The program began with the H.E.S. Principal Ms. Aarti Khungar welcoming the esteemed gathering and emphasized on the importance of sports in a child's life. Approximately 150 students participated in the customized and fun-filled track and field events after conducting trials of more than 1000 students.  The students entered into the spirit of the occasion in a grand way.Students of classes 6 to 10 competed in events including sprints, relays, long jump and shot put.As the budding athletes of B.N.P.S. ran for the finishing line, the school campus reverberated with enthusiastic cheers from the spectators. Many new records were made in 100 meters and 200 meters races.Once the races began, the air was filled with cheering and tons of encouragement for the young athletes.Fun time with a Hope Foundation an N.G.O. students 100 mts. race added to the enjoyment.The Chief Guest, in her address lauded the Athletics Carnival event and stated that it was perfect and that he could gauge the pains and efforts taken by teachers and students for such flawless presentation. She congratulated the Principal and the entire team for the event.The young achievers were awarded with the medals Gold, Silver and Bronze by the chief guest Ms. Nirmala Rani (S.P.E. Zone 01) and Guest of Honour Dr. Lalita (Sports Secretary, Zone 01) who highly appreciated each sports star and applauded the visionary element of the school which nurture and develops their potential in the sports field.The Best Athlete Boy of Sub Junior Category for classes VI - VIII was NishchayPaltaof class VIII – B, Fire House and the Best Athlete Girl was Shruti Saini of class VIII-C, Fire House.The Best Athlete Boy of the Junior Category for classes IX & X was Pratyush Chandra of class X- A, Water House and the Best Athlete Girl was Tisha Khurana of X- D, Space House.The Best Overall Championship trophy was awarded to the WaterHouse by KanwaljeetKhungar, the Principal.The program was co-ordinated and compered by Mrs. Harsha Gupta, Incharge Activities, Sarvpriya of Middle Wing and the smart student anchors were Vasnh Sharma and Nishank Goel. The Vote of thanks was proposed by Mr. Ravi Raj, Co-ordinator-P.E. & Sports. The Carnival saw its culmination with the National Anthem.