An App to Know Your Soldiers 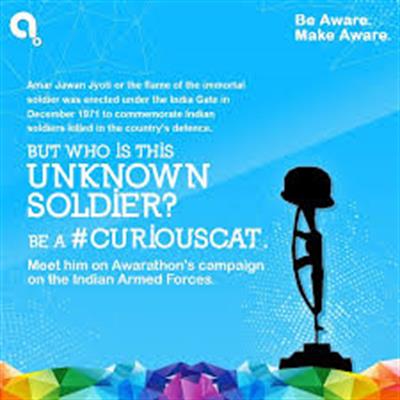 A new gaming app known as ‘Awarathon’ is launched in by a group of young professionals from . The app aims to educate the players about the Indian armed forces.

The app is available on Android and has opened up to a good start.

The app is like a quiz show. There are a set of questions that the player has to answer. The player gets a rupee, for each right answer. This rupee can be redeemed at regular intervals. The player can make a choice either to select a prize from app’s Redeem Store, which includes gifts like online store vouchers or a free waffle at an eatery, or can even choose to donate the amount collected for a social cause.

A campaign called ‘Unknown Soldier’ is currently running. As per this campaign all question asked in the quiz will be associated to the Indian Army, Navy and Air Force. The campaign was launched on August 4 and will close on September 1.

Harshal Shah, co-founder and CEO of Awarathon has given up his job as a tax-lawyer and chartered accountant to start this project. He said “The idea struck me when I was at the funeral of a friend’s brother. He was in the Indian Army and had taken a bullet while serving the nation. Several such stories of sacrifice go untold, and we know very little about those who protect us.”

Funds that will be collected as donations during the campaign will be used to support disabled veterans of the Indian armed forces. After the campaign is closed the app will focus on spreading knowledge on other causes, like conservation of animals, air pollution etc.

A second campaign will be launched from October 2, which will encourage Swachch Bharat Abhiyan.