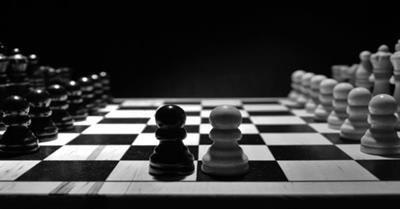 Chess is one of the most popular mind games ever played. It requires you to understand patterns and plan your attack and defence as if you were in a real battle fighting for your life. In fact, this amazing game was also featured in the movie ‘Harry Potter and the Sorcerer’s Stone’.

In the world of chess you are the king, though you are physically weak you are the only one who can dominate the other king. The white king and the black cannot come close to each other and must always maintain a distance of 1 block b/w that is why if all the pieces of the game are cut leaving only the kings it is a draw.

The pawn which looks almost a rather useless piece has a hidden move a scream weapon when the pawn reaches the last square from your side it has the power of changing into anything, a queen, a rook a bishop or a knight.

Another awesome thing about chess is its queen. The queen is considered the best piece in the game though it is not as valuable as the king it is quite powerful. One might only get his or her queen cut if they can see a sure win or else protecting your queen is the second most important thing to do.

In chess, the game is divided into three parts – the opening, the middle game and the end game.

That is all the knowledge of chess for today. Try out the game and be sure to read about some of the best chess players in the world.