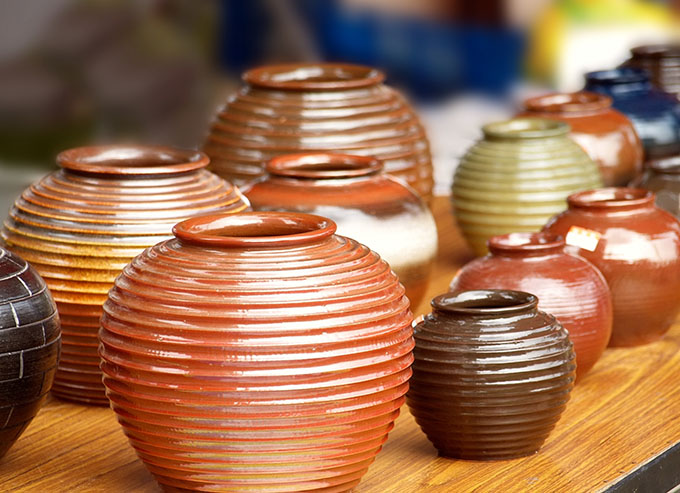 Pottery is said to be one of the most primitive and widespread art of decoration and creativity. It includes objects made of clay and is hardened with heat or water. The objects which are made out of pottery are usually useful ones, for example vessels for storing water or plates, bowls which are used in serving and eating food. Clay is transformed into various forms like statues, decorative items and what not. Clay is a natural element of the earth which is formed after decomposition from rock within the crust of the earth for million of years. A potter can form his product in not only one but many ways with his hand or by the use of a potter’s wheel. There are many ways through which pottery can be formed and it all depends on the artists who create them.

Pottery started millions of years ago when the nomadic men settled down and discovered fire that is when the first pottery was evolved where pinch pots of clay balls into which thumbs and fingers were inserted to create an opening were made. The ancient Egyptians in 4000 B.C. were involved in pottery on a very large scale as they utilized finer clay and heated the pieces at high temperatures in a kiln that prevented the pots from being blackened. Later many civilizations involved themselves in pottery like ancient Chinese, Greeks, Pre-Colombians, ancient Iberians, ancient Romans and Japanese etc.

Pottery is not just of a single type, it is categorized in three different forms:

Stoneware is a type of pottery which is fired at a higher temperature in comparison to normal pottery. The clay involved in stoneware is non-porous as it does not soak up liquids and may or may not be glazed. Stoneware is mostly used for dishes for food, drinking vessels and storage but today it is also utilized for bakeware and serving dishes.

Earthenware is a glazed non-vitreous pottery as it is fired below 1200 degree celsius. This type of pottery includes all terra cottas, building bricks etc. and has become a huge part of tableware today.

Whereas in porcelain, which is also known as bone china or fine china in few English speaking countries. This is fired at a very high temperature of 1400 degree and this pottery is used in the formation of tiles and crockery.

A renowned ceramic pottery artist Ms. Meenakshi Rajendra tells us that pottery is a type of meditation for her because she feels completely relaxed while doing it. She also mentions that seeing a normal clay transform into something completely different and unique makes her extremely happy.

Pottery, along with many of the other crafts is best learned when you receive a hands-on experience. Though the art of pottery takes time to learn, it is rewarding to pick a lump of clay and turn it into a beautiful and usable vessel, all the way from beginning the forming of the vessel to the finishing of it in the fire. Pottery is more than a mere hobby, it connects us to the earth and people who work with ceramics require a wealth of knowledge, patience and diligent skills but also the ability to cope with failure as it aids them in growing as an artist.

In recent times, the world has woken up to clay because there’s a long history of artists who have been working with clay from Picasso to contemporary artists like Lubaina Himid but now fine art galleries have started appreciating and displaying the work by upcoming artists.

Now coming to pottery as a creative activity for children, we all are aware of the fact that kids are born naturally creative and inquisitive. They need to express themselves and as they grow, this urge of expressing themselves gets stronger so if we let them do this through the arts, they will be content, more expressive and better mentally. Pottery has a great thing about itself i.e. there is no template to stick to. There is no such thing as right or wrong, only self-expression is involved and if you allow your kids to do pottery, then they are capable of creating literally anything. Even if the kid is not using fire and glaze in his or her pottery, it’s still fun to just hand them over a bag of clay and witness getting their hands dirty. Though there won’t be anything physical, but pottery will provide them with a range of health and mental benefits like better hand-eye coordination, stronger motor skills and problem solving skills etc.

Pottery consists of various benefits and following are the few of them:

1. Boost Esteem and Self Expression

5. Pride and Self Worth

Clay can captivate the interest of a child for long hours and it also has a soothing effect. If you want to see this, visit a pottery class for children and you will notice a trend. All the children tend to be quiet because they are so indulged in creating a work of art. The kids who are said to be hyperactive can be fascinated by clay and will begin focusing on a single masterpiece.

You will be amazed to know that pottery is also used as a therapy by various psychiatrists. This creative art is used for fighting depression, reducing stress, encourages sociability and acts as a natural pain killer. Pottery can also aid in improving the quality of life and is considered a good way of connecting with yourself by the expansion of body and mind.

So if you are wondering which hobby to pick next for yourself or for your younger one, you can count on pottery. From health to social benefits, it will help you in every aspect of your life and provide you a lifetime commitment of learning and maintaining a productive hobby. Whether or not your creation will be immortalized in a museum or will be kept in your home’s foyer, but seeing your creation in its final form will be a reminder of your accomplishments.