The Magic of Transformation - Origami 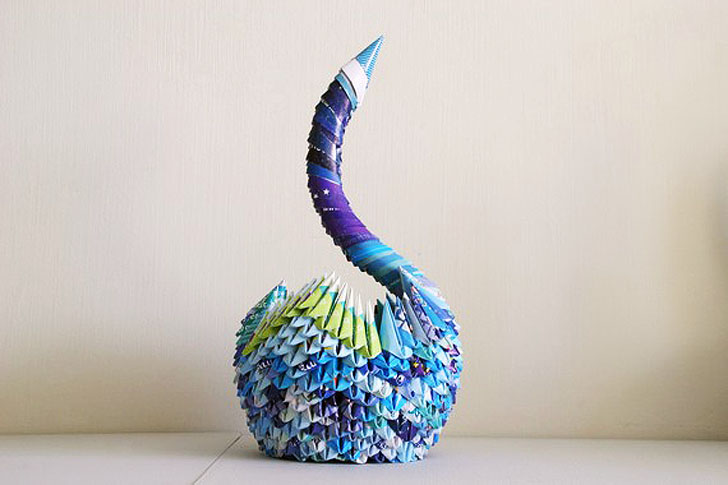 There’s nothing like the joy of turning a square sheet of paper into a beautiful piece of art, say a flower or an animal. Children really enjoy transforming a blank paper into some beautiful creative craft. Well this is the Magic of the Art of Origami. The Japanese name itself is the meaning of the art ‘Ori’ means ‘folding’ and ‘kami’ means ‘paper’that leads it to ‘folding paper’. The tradition of paper folding was practiced in various countries like Europe, China, and Japan as documented by the historians. Though the countries shared the same tradition up to 20th century but the tradition was followed in separate way. The Chinese at traditional funerals use to burn the paper folding mostly as a representation of gold nuggets that were called Yuanbao. This was during the period of Sung Dynasty that was 905-1125 CE. On the other hand the Japanese used it for completely different purpose Noshi that are a kind of ceremonial Origami that are attached to the gifts as a token of good fortune and wishes. This was during the Edo period though later it turned as a form of entertainment. The Europeans during the 17th and the 18th century were flourishing the genre of Napkin Folding. As napkin folding was similar to paper folding but it was given another name in Europe that was Napkin Folding. Later this genre was replaced and was only used as a dinner-table status symbol amongst Noble people. The origin of Origami is from the three countries that had entirely different concept about it yet with the same basic objective of transforming a simple square piece of paper in to something absolutely different and creative.

Origami is fun, inexpensive, creative and a beautiful art of sharing with others. The art of Origami is ancient and has passed on through generations with some changes. As it’s an art it consists of some techniques to be followed. Depending upon the simplicity and complexity of the design one desires to make time to make is followed accordingly. As any other art form, Origami as well has its styles and types from which the more common ones include

Realistic style:creations exhibiting the main features of the subject with the result of complex designs with many steps.

Other styles are Modular style, Composite style, Practical style, Pureland style. All have some basic differentiation in the formation.

Origami has evolved far from birds and boats.To the count till date Origami enthusiasts have come across 80 types of Origami art. The following are the basic types of Origami:

Action Origami:  Though it’s an art of Paper folding yet it is not limited only to still lives, Action Origami is the movement of paper folding into clever ways. It includes Origami that flies, requires inflation to complete or when complete uses the kinetic energy of a person's hands.

Modular Origami: It is the type of Origami that consists of putting a number of identical pieces together to form a complete model. Chinese paper folding includes a style called Golden Venture Folding where large number of pieces is put together to make elaborate models. It is most commonly known as "3D origami",however, that name did not appear until Joie Staff published a series of books titled "3D Origami", "More 3D Origami", and "More and More 3D Origami"

Wet folding: Chinese Paper Folding includes a style called Golden Venture Folding where large numbers of pieces are put together to make elaborate models. It is most commonly known as "3D origami", however, that name did not appear until Joie Staff published a series of books titled "3D Origami","More 3D Origami", and "More and More 3D Origami".

Pureland Origami: This type of origami has restrictions to be followed that only simple mountain or valley folds may be used with all the folds to have a straight forward location but this type is the challenge of creating within the very strict constraints.

Origami quilts: This is a new branch of Origami. In this unit various units are folded and then joined together to form models.

One of the most famous Origami model is ‘Thousand Origami Cranes’. It is a model and group of one thousand origami paper cranes that are held together with strings. It is an ancient piece of art and it is also believed that anyone who folds a thousand Origami cranes will be granted a wish by the gods. Also, Crane in Japan is one of the mystical and holy creature including Dragon and Tortoise.

We all know Origami is a Japanese word but this does not prove that the art originally originated from Japan. As paper degrades easily and in short period of time the origin of Origami is still under debate. Paper was discovered in China in 105 A.D. Thus it can be said that if paper was present, paper folding is possible though there are no such evidence for proving the statement true. On the other hand during the 6th century paper was introduced in Korea and then into Japan by the Buddhist Monks. It is in Japan that paper folding became an art form and evolved into what we know today as "origami". Yet no evidence has been found till date nor for favoring China neither Japan.

For learning the Origami one must start from the basics, that what all materials are required for Origami that would be paper, glue, and scissors etc. Next in line is learning the basic Origami symbols. These Origami symbols are very important in the process of learning the art. Then is learning the basic Origami folds for example the valley fold, squash fold, mountain fold, crimp, petal fold, petal fold valiation, and swivel fold etc. One can make different models of different types following the various styles of the dynamic form of art ‘Origami’. Thus,whenever one is free, take out some papers and try “Origami” art.