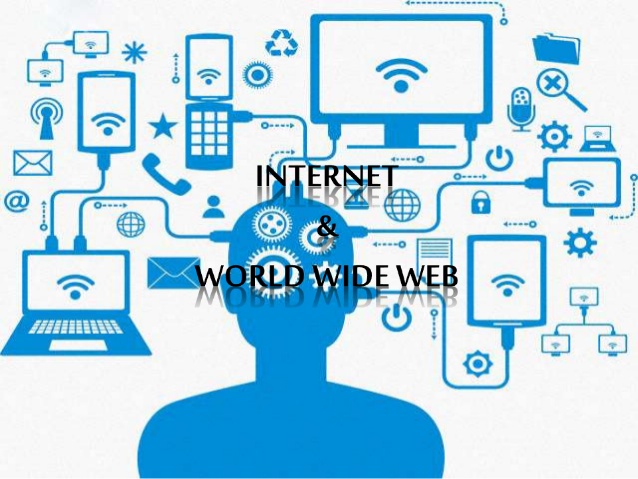 Before we delve into the Web Developing world, we need to understand the difference between the Internet and World Wide Web. Mostly people end up using the terms interchangeably, however, both the two term are not synonymous. They are two separate but related things.

So how are these related and yet different? While the internet is a massive network of networks, or rather a networking infrastructure that connects millions of computers globally, forming a massive network where any computer anywhere in the world can communicate with each other provided they are connected to the internet. On the other hand the World Wide Web or simply web is a way of accessing and sharing information over the medium of internet. The information is transmitted using the HTTP protocol. The web is a system of internet servers that support specially formatted documents. These documents are formatted in a markup language that supports the links to other documents scattered over the internet. One can also access another document while reading one by simply clicking on the hotspots or hyperlinks. The Web is only a portion of the Internet but albeit a big portion.

There is yet another difference that we need to understand between Web Developing and Web Designing. This is also another term that people often get confused with. Web developing is the work that involves developing a website to be hosted on the World Wide Web and deals with the main non design aspect of building the websites. While the Web Designers work on the aesthetics and usability of the website, it is the Web Developers who actually bring all the aesthetics to life using different programming languages like HTML, CSS, JavaScript, ColdFusion, ASP, WebDNA etc.

Web Development is the work of building websites and maintaining them. All of these are behind the scene job that is done for making the websites look pretty and provide a great user experience. Web Developers are like the little elves of Santa Claus who work tirelessly to make all things nice and shiny.

The Web Developers use a variety of coding languages depending on what type of task they are doing as there are two facets of Web Development; the frontend or the Client side and the backend or the Server side.

Once the Web designer  creates the look, layout and features  of the Website , and the Developers receive the design idea from the Web Designer, the frontend developer goes on to work on the layout design and interactivity using HTML, JavaScript and CSS, turning the idea from the drawing board into a interactive reality. The user interface of the website like the visual aspect, the drop down menus, the text and all the hyperlinks are brought together by the frontend developer who writes down the series of programmes that will be necessary to bind and structure all the elements, bring them all together for a wonderful visual experience and interactivity. All these programmes are run through a browser.

The backend developers have a host of things to take care of. The backend consists of the server on which the Websites are hosted, applications to run the website and a database that contains all the data. The backend developers’ works to make the server, the applications and the data work in tandem to create a seamless smooth running. There are several computer programmes that are used to bring all of these together. On the other hand for the smooth running of the server and efficient experience several server –side languages like Java, Python, Ruby, PHP etc are used.

Graphic/Visual Developer: A visual designer is one who is most often well trained in Arts and has good knowledge of Photoshop and other applications to create mockup pages or an entire website. They also need to have good if not complete idea of coding so as to understand what design can actually be made to become alive and interactive.

Frontend Developer: The frontend developer uses programming languages like the CSS, HTML and JavaScript to make all the frontend user interfaces to work smoothly.

Backend Developer: The core logic of the website and the necessary coding is written by the backend developer. The backend developer also works to bring together all the three major components of the server, the applications and the database for a seamless and smooth experience. Knowledge of various languages like Ruby on Rails, python, Node.js, PHP and many others is required.

FullStack Developer: A full Stack developer is much sought after as he/she has the knowledge of running the entire show from front to back. A full stack developer is capable of contributing towards coding and functional solutions in every step of the way.

Web Developing is a lucrative career. One can choose to work as employees of companies or also work as free lancers or consultants.

There are several colleges and Universities offering Under Graduate and Post Graduate courses in Computer Science followed by additional courses that one can take up to become a Web developer. There are several private institutes that offer training on the various languages and applications that are required for Web Developing.  One can also take advice from the Career counselors to get a sound idea about the courses. There are several Career Counselors that one can go to including Online Career Counseling as well.