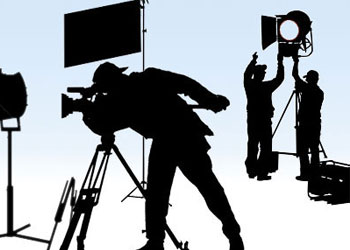 The film is a powerful medium, with the right script and staff of eager team players, you are about to begin an exciting ride. The single most important thing that goes into making a successful film is your passion for telling a story. And the best way to tell your stories is with films.

Film Making is visual storytelling in the form of shots that make up scenes and scenes that eventually make up a complete film. As a filmmaker, you have the power to affect people’s emotions, make them see things differently and help them discover new ideas, or just create an escape for them. In a darkened theater, you have an audience’s complete attention. They are yours, entertain them, move them, make them cry, make them laugh. You cannot find a more powerful medium to express yourself.

There are seven stages of film production

Development: The start of a project varies, but it generally begins with the development of a script. Development may also start with a Director and/or Writer giving an idea to a Producer.

Pre-Production: This is the phase where you narrow down the options of the production. It is where the entire planning takes place before the camera rolls and the overall vision of the project is set. Pre-production also includes deciding the shoot location and casting. The Producer then hires a Production Manager to create the schedule and budget for the film.

Production: During this phase, the primary aim is to stick to the budget and schedule, this requires constant vigilance. Communication is a key between locations, set, Production Company, office, distributors - in short, and all the parties involved.

Principal Photography: It is always the most expensive phase of the film production, due to the actor, director and crew salaries, as well as the costs of certain props, shots and on-set special effects. Everything that has happened up to this point is to make the photography go as smoothly and efficiently as possible.

Wrap: The period after the shooting ends. It is when the set is dismantled and the location is cleared. Everything is returned in good order to suppliers and there must be a full set of records of the shoot.

Post-Production: The post-production consists of reviewing the footage and assembling the movie - editing. There will be contributions required from VFX, Music and Sound Design. The picture will now be locked.

Distribution: Once the film is completed, it is distributed. This is how producers make money with a considerable amount of time and energy invested in securing the right distribution deals. The film then goes into the cinema and to be distributed via various platforms.

The scope of Film-Making in India

When it comes to a career in film making, India has witnessed the height of it. The Oscar Award Winning filmmaker has established that how film making can be an ultimate career choice, which brings money, fame, and awards.

The tremendous growth of the film industry at domestic and in global markets has created an unprecedented demand for qualified and professional filmmakers.

Production houses like Dharma Productions, Viacom 18 Motion Pictures, Annapurna Films, Fox Star Studios, Balaji Motion Pictures are some of the renowned companies one can make a career with.

Filmmakers now are also much in demand in other domains as an audio-visual medium is fast emerging as an active mode of communication. Vloggers are riding the wave of this new demand. Documentation is another area having demand for filmmakers. Besides, one can also work in fields like social service, entrepreneurship, video content development, freelancing, advertising agencies, and marketing firms.

The career in Film Making

The world is looking closely at Indian filmmakers these days, and they are not restricting themselves to movies- newsreels, music videos, commercials and documentaries all cater to different audiences, and all are equally intense to produce.

Self-employment through marketing of personal skills

Film making careers can be direct that actually involve in film projects, and indirect careers include critics, archivists, and distributors. There are no real single filmmaking courses.

Producer: Their main job is to make sure that everybody else is doing theirs. He chooses the story, manages resources, appoints the cast and crew including the director, manages legalese, accepts locations, etc and can even direct. The post is usually held by Mass Comm. graduates from film and television institutes.

Director: It is him that most people will have to work with. The costume, the choreography, the music and crew all rely on him.

Editor: It is the editor’s job to put the film in sequence. He works very closely with the director and the producer to keep their visions real.

Screenplay Writer: The screenwriter brings his creative and visualization talents to translate between the mediums. Any literature graduate or with creative writing skills can pick this up.

Actor: Powers of empathy, mimicry, and memory all best serve the actor. Good physical attributes can only be learned up to a degree, but degrees in acting do help.

Cinematographer: The cinematographer compiles scenes for visual impact; he decides to light, camera angles it is a job with high technical expertise requirements.

Cameraman: Must have high technical proficiency and in-depth knowledge of cameras.

Soundmen: A degree in Electronics/ Audiography with a high school science background helps a lot.

There are many career counseling services in Delhi, and FairGaze.com is the best socio-educational ecosystem that assists students to discover their career path. They conduct innovative Future Bright Programs for holistic development that provides access to continuous mentoring and facilitates networking with peers and friends.

They also provide personalized career guidance services online that has been designed after extensive research to bring out the best in every student. These programs are delivered by the best mentors and experts who share their years of experience to add value to the students’ life.