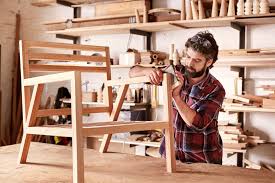 Can we imagine our life without furniture? These moveable objects that support our various day to day activities like eating, sleeping, or relaxing existed from ancient Stone Age. The Neolithic period which is approximately from 5,500 to 2,500 B.C gave the world the first documented instances of furniture being in use from the ancient times. Not just the "Flintstones" but people in ancient Scotland used stone dresser and cupboards for storage. The first items created during the Neolithic period were made of stone. Dressers, cupboards and bed were amongst the first forms of furniture that were made. During Neolithic period the dresser had great significance as every house had a dresser facing the entrance of the house and often were elaborately carved. Though over the centuries the functionality of furniture has changed but the aesthetics of furniture still prevails. The basics of furniture has remained same however, there definitely has been great changes in terms of materials used, stability and the design element. The chairs are no longer just a place to sit but has gone through great changes, made for comfortable and more stylized like a recliner, a rocking chair or made into functional item like the ones used in a saloon or Spa or at a barber's shop that meet specific requirements. Beds have gone through major transformation in terms of comfort, style and other functionality like storage beds.

Ancient furniture was built of purely organic material and there was lacks of proper know how to protect them from the elements and these rotted away. The evidence of furniture is found from ancient art, like frescos, or the potteries. The real evidence of furniture was found in the Egyptian Tombs and they are still in existence. The Egyptians placed the furniture in the tombs of the highly regarded noblemen for use in the afterlife. Due to the wonderful construction of the tombs and the dry climate of Egypt these furniture have remained unharmed from the elements.

Egyptians have contributed largely towards many things that are in use today, like furniture, paper, embalming, irrigation methods and many more. While most part of Europe was still in the Stone Age the Egyptians were way ahead and building magnificent buildings and monuments, writing on paper, as using different types of furniture. Being a desert region wood was a luxury that used to be imported and used only by people of higher status. However, this did not stop the Egyptians from devising furniture that were made from the reeds, rushes and palm fronds.

Coming down to the Sub continent of India, it has a rich history as far as wooden furniture is concerned. India is known all around the globe for its rich art, culture and literature and these richness has permeated into the way furniture has been designed from ancient times. Different parts of this rich country have different art forms and these have also translated into the way furniture has been made in different parts of the country. Furniture making has been in practiced in India since the rule of the Vijayanagara Empire who ruled over the South of India from the 1336 AD. Skilled craftsman were held in high esteem and had excellent workmanship and would create and preserve the legends and the rich cultural history in wood. Certain regions like Rajasthan used furniture sparsely owing to the climatic conditions, or the furniture used were very utilitarian in nature. Wood carvings were not just part of furniture making but temples and homes of people were decorated with elaborately carved wooden doors and balustrades. The different designs of carved four poster beds are still in demand and much sought after.

The furniture making in India also evolved with the arrival of foreigners in its shores like the Mughals, the Portuguese, the Dutch, The French and the English. The foreign culture still continues to influence the Indian furniture making. Despite developments in modern technology, a big portion of Indian furniture is still made using age old tools and techniques thus retaining the tradition and ethnicity apart from the durability and elegance.

Furniture Designing holds a very important part and a specialized field where one has to merge both the functionality and fashion in a seamless manner. Interiors designers are of the opinion that a piece of furniture is one of the most important aspects of interior space. Depending on the layout of a house, good and matching furniture not only add to the functionality but also adds to the aesthetics and personality to the home.

To be a Furniture Designer one should be creative and practical. Strong visual awareness along with good drawing skills, eye for details, understanding of ergonomics, and knowledge of computer aided design and other modern technologies will always be of added advantage.

There are several renowned institutes in India that offer courses on Furniture and Interior Designing. Some of the prestigious institutes are:

Apart from these there are colleges and Universities across the country that offer courses on Furniture and Interior Designing.

Furniture designing is a lucrative career. One can opt to work for furniture manufacturing companies or start up their own studio or production or work as free lance consultants. The avenues to explore are many. Being a creative and ever evolving industry it will keep one occupied with new thoughts, concepts and work.