Stop Schools from De-Registering Students With Low Grades Or Marks 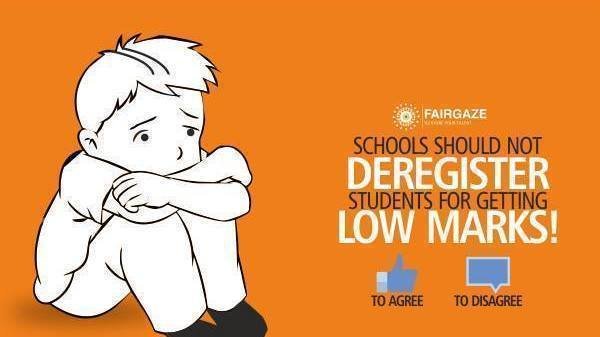 Since the beginning of the existence of human, learning is the one thing which has helped the human to survive and grow. Humans learn from the things around them, experience them and use that knowledge to do other tasks. Learning never has any end in our whole life. We keep learning from the moment we are born till our last breath. Learning and experiencing make our life easy to live. It gives us a purpose. Schools are the primary source of our knowledge and hence it plays a very significant role in how we shape our lives.

It is no secret that a good education is a right of every citizen as it has the power to change a life. When one person gets educated and gets the power to change his life, that person collectively with other alike persons can change the future of a nation as well. Focusing on the same aim and purpose, governments are investing more than ever before on educating their citizens. Government is becoming eager for them to compete in the global workforce. A progressing global middle class is spending more of its own money to educate their families. Employers of various small scale to large scale companies are looking for a new sort of colleague - someone which has the skills to flourish in the 21st century. Combined with technologies which continue to develop at breakneck speed, the result is a world that has the want, the desire, and the means, to learn at scale.

Yet there is so much left which needs to be done. One in five adults in our nation lack the written communication skills they need to progress and grow in life, and 57 million children do not know what it's like to step inside a classroom. Many millions of more children are in education, but they are not learning effectively. The global challenge for providing education is not just limited to giving access, but also ensuring progress.

Some private schools have started de-registering those students who got low marks and grades. In a letter sent to all private schools, the district education officer has directed the officials for submitting the applications which are concerned for the mandatory registration. This step has been taken to find out whether private schools are following the 25 % reservation rule under the Right to Education (RTE) Act, 2009 or not.

Registration forms have been sent to all private schools and those which do not register with the administration by April 30, can lose their affiliation. Many private schools - recognized and unrecognized - have been found violating the RTE norms. It is taken into consideration that some authorities have allegedly even submitted fake and wrong figures for showing that they observe the 25 % reservation rule for students from economically weaker sections of society. This is the main reason why all the private schools have been asked for furnishing the details of their below poverty line students from the new session.

All private registered schools have also been asked for providing acquiescence reports on whether they fill 25 % of the seats with below poverty line students under the RTE Act from the next academic session. A letter was also issued in 2011 regarding the registration of private schools under RTE but various institutions ignored this letter. But this time, the government is becoming strict and giving those schools a final warning. If they do not abide by it, the affiliation of the school's affiliation would be canceled.

The district education office would also scrutinize if the schools even have adequate infrastructure and teachers or not.

Satish Kumar is a tea stall owner who shares his story and said: "My daughter is in Class VIII and pleads to be admitted to a private school as she wants to be a doctor. In private schools, she can learn new things but I cannot afford it. If the private schools provide reservation to economically poor students, it will be advantageous for us."

This raises a very serious and valid question which is should schools be allowed to deregister students because they got low grades/marks in their classes? Many private schools tell the parents of students to take them to some other schools because they are getting low marks or grades. This practice is uncontrolled in 8th and 10th standards especially. The reasons for schools adopting such practices and taking such harsh steps could be many including:

The school aims to ensure good 10th and 12th results.

The students who are weak in studies require more effort from the faculty and teachers.

These schools could get new students for seats which will be emptied by weak students.

The schools accepting and performing such practices are unmindful of the trauma inflicted on the student, whose self-esteem and confidence is crushed, who is burdened with a loser-stigma and is scarred for his entire life. Having studied in a good school for many years, such students are forced to look for another school that will take them in. The please and request of distraught parents of such students are of no avail and are left with no choice but to desperately look for another new school for their child lest they lose a precious year in their child’s study.

This practice leads to see the increasing number of cases of depression among students as young as 12 years and many even resorting to extreme steps like committing suicides and quitting from everything in their life. This petition seeks the Honorable Minister HRD Shri Prakash Javadekar, Dy Chief Minister Shri Manish Sisodia and the Hon Minister of State for HRD Shri Upendra Kushwaha for framing clear guidelines for ensuring that the schools do not deregister students for low grades/marks. Setup is a dedicated panel to look into such incidents. A launch awareness campaign is also set up for educating students and parents of recourse available in such instances. Signing this petition will provide help to countless young children for avoiding such traumas and demonstrating to the authorities the urgent need for immediate initiatives to be taken to stop schools from deregistering students just because they got low grades/marks.

Sign in this petition "Stop Schools from De-Registering Students With Low Grades/Marks" (https://www.change.org/p/stop-schools-from-de-registering-students-with-low-grades-marks) started by FairGaze that aims to bring a positive change in the domain of education. FairGaze believes that every child is unique and special; we all have to make an effort to make a child realize that if a child is not good in learning, the world does not end.

No specific school is targeted or pinpointed in our initiative/reform. We are creating public awareness among the whole education community nationwide on this issue.

By: Preeti Narula and Bhavna Sharma