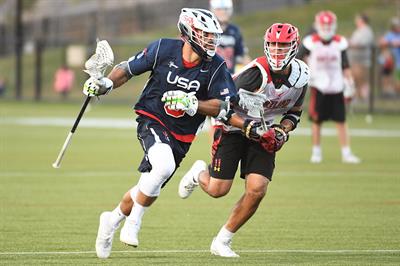 There exist four versions of this sport that have different sticks, fields, rules and equipment: field lacrosse, women's lacrosse, box lacrosse and intercrosse. Field lacrosse (outdoor) and box lacrosse (indoor), the men's games, are contact sports and all players wear protective gear: helmet, elbow pads, gloves, and shoulder pads. Played outdoors, the women's does not allow body contact but does allow stick to stick contact. For women players, the only protective gear required is eyegear, while goalies wear helmets and protective pads. The non-contact sport played indoors is Intercrosse, which can be played by mixed-gender that uses an all-plastic stick and a softer ball.

The Federation of International Lacrosse governs the sport.

This game is a part of the cultural tradition of the Iroquois (Haudenosaunee) people, inhabiting what is now New York and Pennsylvania. Indigenous peoples in North America developed Lacrosse as early as 1100 AD. The game was well-established by the seventeenth century and was documented by Jesuit missionary priests in the territory of present-day Canada.

According to the rules of the traditional aboriginal Canadian game, each team consisted of about 100 to 1,000 men on a field that stretched from about 500 m (1,600 ft) to 3 km (1.9 mi) long. for Played for two to three days straight, these games lasted from sunup to sundown and were played as part of ceremonial ritual, a kind of symbolic warfare, or to give thanks to the Creator or Master.

For many years, Lacrosse played a significant role in the community and religious life of tribes across the continent. In the early days, lacrosse was characterized by deep spiritual involvement, befitting the spirit of combat in which it was undertaken. The players who took part in this did so in the role of warriors, with the goal of bringing glory and honor to themselves and their tribes. The game was referred to as "The Creator's Game" and said to be played "for the Creator". Jean de Brébeuf, the French Jesuit missionary saw Huron tribesmen play the game during 1637 in present-day Ontario. He fondly named it as la crosse, which means ‘the stick’ in French. This name seems to be originated from the French term for field hockey, le jeu de la crosse.