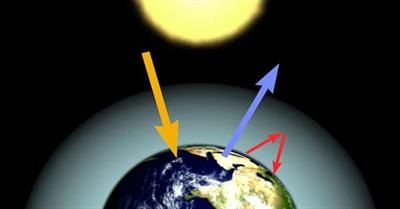 Do you know! What is a Greenhouse, as the term suggests, is a structure made of glass which is designed to trap heat inside. Even in the winter days, there is warmth inside it. The greenhouse gases present in the atmosphere of the Earth plays a vital role in trapping the heat of the Sun and thereby gradually warming the temperature of Earth. These gases are produced and released due to human activities This is known as the Greenhouse effect. The earth is habitable for living beings due to the equilibrium of the energy it receives and the energy that it reflects space.

Causes of the Greenhouse effect are broadly categorized as:

Some components that are present on the Earth naturally produce greenhouse gases. For example, carbon dioxide is present in the oceans, decaying of plants due to forest fires and the manure of some animals produces nitrogen oxide, and methane, which is present in water and soil. Due to the rise in Humidity, the Water Vapour level raises the temperature by absorbing energy. Humans and animals inhale oxygen and exhale carbon dioxide in the atmosphere.

All the countries of the world are facing the bad and ill effects of global warming. The Government and non-governmental organizations must spread awareness and should take appropriate and concrete measures to control the emission of toxic greenhouse gases. They need to promote the greater use of renewable energy and forestation around us. Also, it is the duty as well as the responsibility of every citizen to protect the environment and not use such means that harm the atmosphere. It is the need of the hour to protect our environment and our surroundings else that day is not far away when life on Earth will become difficult.