Decrease In Pollution Level Due To Lock Down Around The Nation 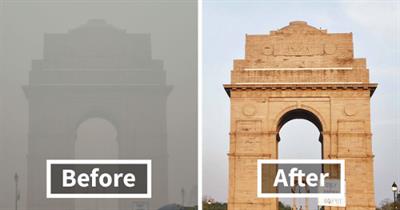 Due to the excessive Co2 immission, the human race was on the verge of extinction. But there is a saying, 'Miracle do happen at last moment'. And one such miracle changed the life of people. Due to the Corona Virus outbreak, the Indian Government had declared a 'poorna lockdown'. There was a lot of chaos amidst the people about their survival in such a pandemic, but who knew that Mother Nature was about to gift us with something so special. Be it Air Pollution or Water Pollution, mother nature has healed up herself. It's a lesson we are learning but apart from this, this has also taught us that everything heals with time. Time is all the environment had wanted.

Within the last few weeks, we have observed such a drastic change around us which has taught us that nothing is impossible in this world. Though Corona Virus has put us all in such a serious state but everything has its pros and cons. The ghats of river Ganga that are known for the evening aarti used to be extremely exploited but now the pious river is back in its form, crystal clear. The ghats are all tidy and clean. The polluted air that we used to breathe till a few weeks back is now so pure. It's a boon for all the asthma patients and all the people who were suffering from breathing diseases.

There has been a great drop down in the human activities lately. With such a quick and drastic decrease in human activities, NASA satellites have detected the lowest aerosol levels in 20 years over northern India. Having frequent rainfalls have also lead to a decrease in the pollution level. According to CREA Report, "Overall consumption of petroleum products in India decreased by 18% during the same period.”Along with a decrease in the level of nitrogen dioxide in the air, there has also been a great decrease in the level of Co2 and aerosol. In one of the CPCB’s report, it was observed that about 78% of cities in the AQI bulletin are falling in “good and satisfactory categories in the lockdown phase, increasing from the average of 44% seen in the pre-lockdown phase.”The reduced use of fossil fuel has not only has cleared our air but has also given us a chance to conserve these precious resources.

Finally, those days are back when we can see the clear blue sky and count the stars in the clear black sky.
After having such a great recovery, will this state of nature remain the same? Here I leave you in a dilemma. Will humans learn from their mistakes?