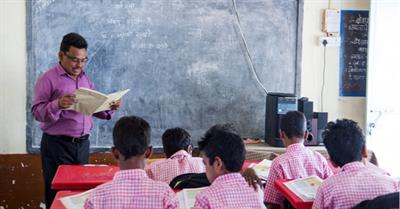 In India, Delhi is facing a deeply worrying spike in Covid-19 cases. A few weeks ago, it has become second on the list of worst-affected states in the country. It still has nearly three lakh confirmed cases. Of these, over 5,400 deaths are linked to the virus and around 25,000 are active cases. According to the sources, across India over 75,000 new cases have been reported in the past 24 hours, with 940 deaths linked to the virus. The total number of cases has crossed 65 lakhs.

Though in several parts of the country, the economy has been slowly reopened since May, schools and other educational institutions remained shuttered. Deputy Chief Minister, Manish Sisodia ordered that all schools in Delhi will remain shut till October 31 due to the amid Corona Virus outbreak on Sunday. Earlier, The Delhi government declared that schools in the national capital will remain closed till October 5, and allowed online classes for students.

Being a parent, Arvind Kejriwal, Chief Minister, understands the seriousness of the situation and instructed that all schools in Delhi will remain closed till October 31 due to Corona. Mr. Manish Sisodia tweeted that At this time it will not be appropriate to take any risk regarding the health of children.

The Fifth phase or "Unlock 5" announcements had been made earlier this week in which state and union territory governments were allowed to reopen schools, colleges, and other educational institutions in a graded manner after October 15

Online and distance learning is the preferred mode of teaching, where students can easily be present online rather in a physical way and practice social distancing.

The center instructed that schools opting to restart must ensure attendance is not enforced and it must depend upon parental consent. State and UT governments were asked to make their standard operating protocols for schools. There have been concerns regarding restarting schools in the middle of the outbreak, given that those below the age of 10 are considered particularly vulnerable to the infection. In the time of the pandemic, the government tried to recognize some of the issues faced by students. Last month the center allowed students from Class 9 to 12 to visit their schools to clarify doubts and receive guidance from teachers.

Students visiting schools for such purposes must have written permission from their parents and can only do so in shifts on certain days of the week. According to this order, schools were allowed to recall 50 percent of teaching and non-teaching staff.