How is Tornado Formed? 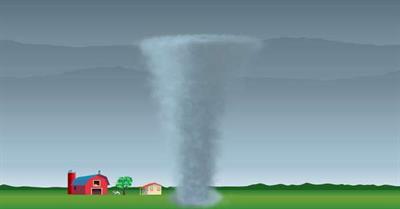 We all must have heard of the term “Tornado”. Some must have seen it on TV or might have even experienced it also! Well have we ever thought of what it is? How is it formed? Well today I am here to explain to you all about tornadoes.

Tornadoes are vertically- funnel-like structures which spin rapidly in the air. They violently rotate in the air causing a very powerful thunderstorm and also cause a lot of destruction. Their winds may top 250 miles an hour and can clear a pathway of a mile wide and 50 miles long. These violent storms occur around the world, but the United States is a major hotspot with about a thousand tornadoes every year. Thers is a region called "Tornado Alley'' in the US which includes the area in the eastern state of South Dakota, Nebraska, Kansas, Oklahoma, northern Texas, and eastern Colorado. It is often home to the most powerful and destructive of these storms. U.S. tornadoes cause 80 deaths and more than 1,500 injuries per year as per some statistical report.

As per national geographic channel report, Tornadoes form when warm, humid air collides with cold, dry air. The denser cold air is pushed over the warm air and this results in the production of thunderstorms. The warm air rises through the colder air, causing an updraft. The updraft will begin to rotate if winds vary sharply in speed or direction.  The rotating updraft is called the mesocycle. It draws in more air from the thunderstorm. This results in the increase of its rotational speed. Cool air from the jet stream, a strong  band of wind gives it even more energy. Water droplets from the mesocyclone form a funnel-like structure. The funnel continues to grow and eventually starts descending from the clouds. When it touches the ground it forms a tornado.

Tornadoes are the most deadly destructive forces of nature. They come in all shapes and sizes. Rope Tornadoes, Cone Tornado, Wedge Tornado, Multi Vortex and Satellite Tornadoes and water spout and landspout Tornadoes are some of the types because of the shape they assume while hitting the land. Among all these, wedge Tornadoes are considered deadliest as it created a mayhem with its widespread destruction.

Some of the tips to stay safe during a Tornado given by experts are: