Pollution Due to Firecrackers 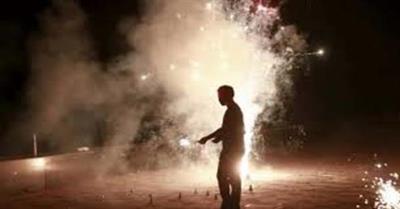 Fireworks cause severe pollution leaving metal particles, dangerous toxins, harmful chemicals, and smoke in the air. It does not require much time and stays for hours and days in the environment. Some of the toxins never fully decompose, rather be present around in the environment, poisoning all they come into contact with. According to the EPA, exposure to fine particles, such as smoke and haze, is linked to negative health implications and leads to coughing, wheezing, shortness of breath, asthma attacks, and even heart attacks. People who face severe problems are those who are suffering from heart or lung disease, older adults, and children.

People burn crackers to express their joy. Be it a wedding, New-year or any other festival, It's like burning firecrackers has become a tradition of showing one's happiness.

Causes of Pollution Due to Firecrackers

Most of the time, firecrackers are burned in excess. It mainly happens to celebrate some occasion or the other. The festival of Diwali and Dussehra is a great contributor of pollution due to firecrackers. People all over the country burst loads of firecrackers to celebrate it. However, they do not realize that they are causing harm to others. The level of air pollution and noise pollution increases rapidly during this time.

Moreover, wedding celebrations also cause a lot of pollution. People burst all sorts of firecrackers at the wedding. Each day hundreds of weddings take place and thus millions of firecrackers get burned in the year.

Furthermore, commercial events like cricket matches and product launch also use firecrackers to celebrate. Similarly, New Year’s Eve is also filled with firecrackers and a lot of celebrations.

Impact of Pollution Due to Firecrackers

Firecrackers leave a major impact on the life of living beings as well as on the environment. It contributes largely to air and noise pollution. Furthermore, firecrackers also pose serious health hazards. It results in respiratory disorders, hormonal imbalances, and severe heart diseases. Moreover, it also impacts the mental well-being of a person. People lose their sleep due to a high level of noise and also cause hyperventilation.

The bursting of firecrackers is very dangerous to birds and animals. The loud levels of noise mainly cause deafness in some of the animals. The continuous sounds and noises scare them. Though pets have the option to hide in their homes, the stray animals have nowhere to go during this time.

Some inhuman people even mess with the poor stray animals. They tie firecrackers to their tail and make fun of it. Not caring about their situation what it will cost to those poor animals. The birds also get impacted badly, the bright light of cracker can disorient or blind them.