Role of Youth in Nation Building 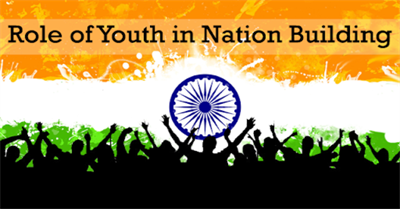 Give the youth a proper environment. Motivate them, extend them the support they need. Each one of them has an infinite source of energy. They will Deliver.
- Dhirubhai Ambani

The vision of a country lies in its youth. It’s a well-known fact that the youth of any country is a great asset. They represent their country at every level. The role of youth in nation building is very crucial, the intelligence and work of youth take the country on the pathway of success. Youth is known as the building block of a country.

Youth can bring social reform and improvement in society. The nation requires their support in taking the country forward towards progress. The youth is very energetic and zealot which can help a country to rise. It doesn’t matter in which field the country wants to progress, whether it is a technical field or sports or some other, youth is needed, now as a support system and in the future as leaders.

To make the country prosperous, the government has to create opportunities for youth. For that government must introduce programs that will help in filling the problem of unemployment, poor educational institutes. Also, equal opportunities must be provided for all irrespective of caste, religion, gender, race, and more. The country should make sure that every youth get an equal chance and has a chance to prove themselves worthy. It is more like give and take system; the government has to nourish its youth so that later on they can help in flourishing the country. It is the government's responsibility to supply youth with proper and good facilities getting equipped with the knowledge of this century.

In conclusion, the role of youth in nation-building is crucial and important. They have a positive influence on other young people and nations also they are extremely ambitious. They are so much capable of creating an identity for themselves and move the nation forward. However, without the government’s support and fellow youth, it is not possible.