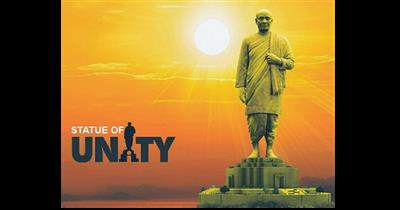 The Statue of Unity – the tallest statue on earth is made in the honor of one of the greatest Indian Revolutionary Leaders and Freedom Fighter, Sardar Vallabhai Patel, affectionately known as the Iron Man of India. Prime Minister Narendra Modi on 31 October 2019, unveiled the world’s tallest statue, the 'Statue of Unity', to the people. The project was first announced in 2010 and the construction of the statue started in October 2013 by Larsen & Toubro. It was designed by Indian sculptor Ram V. Sutar and was inaugurated on 31 October 2018, the 143rd birth anniversary of Patel. The height of 182m was specifically chosen to match the number of seats in the Gujarat Legislative Assembly. The Statue of Unity, an architectural wonder, is the tallest statue in the world and the quickest to be completed in just 33 months. The iconic statue is taller than the 153m Spring Temple Buddha in China and almost twice the height of the world-famous Statue of Liberty in New York.
It seems as if the statue is walking towards the people. The statue faces the Narmada Dam and is located on the Sadhu Bet near Rajpipla on the Narmada River. As this is the statue of iron, one of the major architectural supplies had to be iron itself. Around 129 tonnes of iron implements were obtained from nearly 100 million farmers in 169,000 villages across all states for the statue. The statue along with all the support spreads across 2 hectares of land. There is an artificial lake built around 12 square kilometers. It is made of 1700 tonnes of bronze. It has been filled with concrete cement of 180,000 cubic meters and structured steel of 6,500 tonnes. As told earlier, the statue is made from bronze, a metal that is bound to go under some reactions when exposed to air for a long time. And it is expected to change its color from bronze to green in 100 years. As Gujarat is known for its tourism, the Indian government has taken a step to create a tourist ecosystem, which comprises a museum, hotel, and audiovisual gallery. The RCC towers are there at the bottom of Patel’s leg. It has two lifts and each can carry 20 people to a great height of the statue in just a minute.
Vallabhbhai Patel, the icon of India’s solidarity and sincerity, was a political and social leader who played a major role in the country’s struggle for Independence and consequently guided its integration into a united, independent nation. Vallabhbhai Patel is also remembered as the ‘Patron Saint’ of India’s civil servants for establishing modern all-India services. His contribution as the Chairman of the Constitutional Committee on Fundamental Rights, Minorities’ rights, Provincial Constitutions, and Demarcation of Borders of Scheduled Areas are the mainstays of the Indian Constitution. Rajasthan to Assam and Kashmir to Kanyakumari, if we can travel freely today, it is because of Sardar Vallabhbhai Patel. Just assume, if he was not there to unite India then we would require passports and visas to travel from one state to another!
Well, The Statue of Unity has positively risen as the ‘Pride of the Nation’ and also serves as a tribute to the nation’s most well-spoken statesman – Sardar Vallabhai Patel.
"The statue will remind those who question India's existence that this nation was, is and will remain eternal," - Prime Minister Narendra Modi.