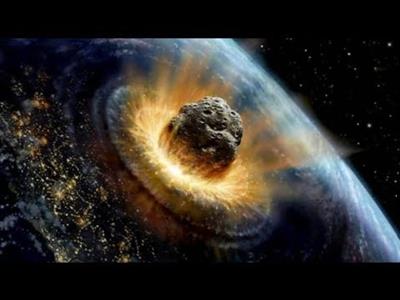 JOURNEY FROM THE ATMOSPHERE TO THE LITHOSPHERE

Before discussing what a meteorite is and about different meteorites, it is important to first know about the difference between a meteor, meteoroid, and meteorite. Meteor is the flash of light that we see in the night sky which is also known as a shooting star. Most meteors that enter the Earth's atmosphere are so small that they vaporize completely and never reach the planet's surface. These meteors come from meteoroids. The main sources of meteoroids are from leftover dust that formed the Solar System, bits of rocks, metal pieces and sometimes they can also be the result of collisions with planets.

If any part of a meteoroid survives it falls through the atmosphere and lands on Earth. Then it is called a meteorite. Although the majority of the meteorites are very small, their size can range from about a fraction of a gram (the size of a pebble) to 100 kilograms or even more (the size of a huge, life-destroying boulder).

As now we know that there can be meteorites that can be heavy, light, small, big and all of them differ in shapes and sizes. There are several meteorites recorded which are huge in size like one of the biggest meteorites named Hoba which measured around 119,000 pounds. This huge sized meteorite is kept in Namibia and it has never been moved from where it fell as nobody was able to pick it up and it is also considered that the weight of Hoba measured around the weight of Eiffel Tower. Similarly, there are other meteorites like Mbozi in Tanzania (recorded in the 1930s), Willamette in the US considered the largest meteorite ever found in the US, The Cape York meteorite is another meteorite which came on the earth nearly 10,000 years ago.

Apart from all these meteorites recorded in history, one of the latest and the biggest meteorite which fell on the earth in the year 2013 is Chelyabinsk meteorite and the weight of this meteorite measured over 1,442 pounds. This meteorite fell in southwest Russia and caused a meteor airburst. It was so big that over 7,200 buildings in six cities were damaged by the explosion’s shock waves. It is also the only meteorite that has confirmed to have over 1,500 people injured due to the breaking of windows and other things caused by the meteorite shock waves.

This was the largest known object entering the Earth’s atmosphere since the 1908 Tunguska meteorite. The seismic energy radiated from this event was recorded by seismic stations worldwide including the dense Chin Array which is more than 4000 km away but the waves were not much accurate.

This mysterious journey of Meteorites from the atmosphere to the lithosphere cannot be predicted as such because less than 5% of the predictions are considered right, so it is always best to have your presence of mind, becoming practical and staying happy.