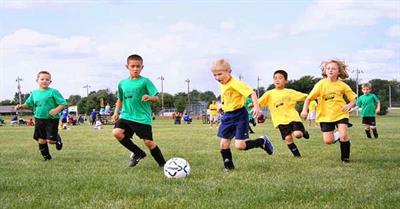 Sports is important for a child's complete development as it helps us develop physical skills. When a child loses a sport, it learns to lose. And this in the future helps us. Being a good loser takes maturity and practice. Playing sports makes us physically fit. Here are some benefits of playing sports-

and so on.
When a child plays a sport, it gets to know about it more deeply and it also increases their knowledge. And by this practice, he becomes a good player. Playing sports for children is very important as it decreases their fat and the child becomes healthier and stronger. Playing sports is very important at a growing age. It increases the focus and concentration which is required in studies. Sports help us in increasing the value of-
and so on.
For example-
In Badminton, the focus is on the shuttlecock and according to it, our hands and legs coordinate. When we want to hit the shuttle, we jump, move sideways and backward, and then hit it. When the player is unable to hit the shuttle then the point goes to the opponent.
In cricket, the focus is on the ball and according to it, we move our leg forward or sideways and then hit the ball with the bat. If the batsman isn't able to hit the ball and the ball hits the stumps, then the batsman is out. The batsman can also be caught out.
In tennis, if we do not hit the tennis ball with the tennis racket, then the point goes to the opponent.
Similarly, in the sport football, the focus is on football and we have to kick it by the leg, chest, or the head to make the goal.
In all sports, there is one thing common. That is teamwork. By teamwork only, we can play these sports. For example, in cricket, if there is no teamwork, then there is no way of winning it. So, sports are very important for a child's complete development.
Utkarsh Garg
Class: 5
Sri Venkateshwar International School
Facebook
Like (0)