How to Fight Menstrual Taboos in India? 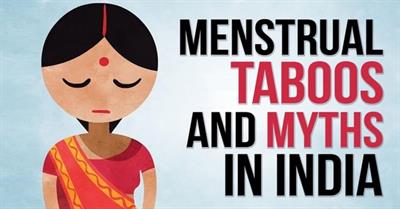 During menstruation or periods, the uterus sheds it's lining through a women's vagina in the form of blood or mucus if a woman is not pregnant. This is a very natural phenomenon that happens to every woman.
But unfortunately in India people associate many taboos with menstruation. This happens because we Indians don't want to talk about this topic as it is a matter of shame and impurity. Even many women in  India are unaware that why do they bleed every month? What is the reason behind it?
There are many taboos in India associated with menstruation like:-
1) women during her periods is impure so she is not allowed to visit the temple or do anything related to worship or praying.
2) it is believed in certain rural areas that if women see any male during her periods she may get pregnant.
3) If a woman during her periods goes near the pickle, the pickle may get rotten.
There are many restrictions for women during her periods in some areas:-
- Not sitting on the bed.
- Not touching utensils and many more.
But now the question comes how do we challenge, question and fight such taboos associated with menstruation.
1) As a responsible citizen we should make people aware of the concept of menstruation. (Especially in rural        areas so that women get rid  of the discrimination they face their periods)
2) We should start talking about menstruation without any hesitation or shame.
3) As a responsible youth we should question such taboos and stand against them.
4) most importantly we should normalise menstruation.
Let us start taking care of women on her periods rather than not accepting her just because she bleeds every month.
Tanushka Sharma
Bharat National Public School.
Facebook
Like (0)