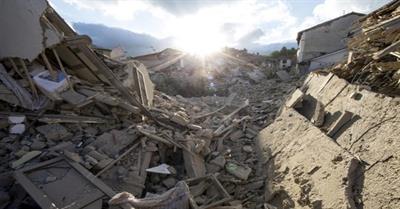 An earthquake is a sudden shaking of the ground. Earthquakes are measured in the richer scale using a device called a seismograph. A seismograph measures the earthquake through the underground seismic waves.

Earthquakes are usually caused when underground rock or plate suddenly breaks. During the beginning of this process, these two blocks of rock rub against each other and they stick a little. These rocks continuously push each other without moving and then after some time, they break because of the pressure which is built up while shaking. When these two rocks or plates break they cause a sudden release of energy which causes an earthquake. The plates or rocks continue to move until they get stuck again. The place underground where the rock breaks are called the focus, whereas the place above the focus on the surface of the earth (lithosphere) is called the epicenter.

The epicenter of an earthquake can also be inside the water bodies like ocean floors. If the epicenter lies on the ocean floors then it leads to a tsunami. A tsunami is a series of huge waves that occur as a result of violent underwater disturbances. Such an earthquake results in the death of several aquatic animals. Earthquakes measuring over 5.5 richer scales are considered to be dangerous whereas minor earthquakes of around 2-3 richer scales are sometimes not even felt by people. Large earthquakes are considered to be dangerous as the pressure of the seismic waves could lead to several devastating instances like falling off buildings, bridges, highways, etc. especially within the magnitude.

REMEMBER THE PRECAUTIONS TO TAKE IF ONE FEELS THE EARTH SHAKE

Drop: Get down on hands and knees to get protected from being knocked over. It also puts one in an ideal position to crawl for shelter.

Cover: Place an arm and hand over the head and neck to shield them from debris. Go for any nearby table to shelter under it until the shaking stops. If a table isn’t in sight, try to stand under the beam.

Hold: Stay still, until the shaking stops. If one is under a shelter like a table, keep a hold of it with one hand. If in the open, shield head and neck with arms.

THINGS WE SHOULD NOT DO DURING AN EARTHQUAKE