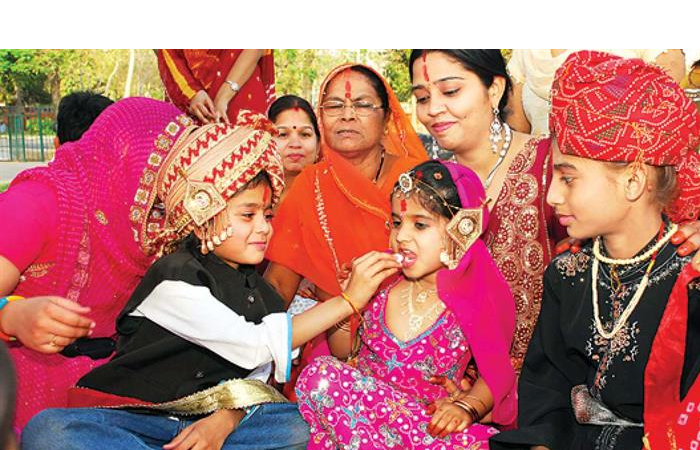 Marriage is union of two people as partners in a personal relationship. India celebrated weddings like a festival or can we say more than that. It is a great event in Indian families where some parents start the preparation of wedding when the child is born and some later. History proves that earlier the age of marriage was too young. In places like Rajasthan, children under the age of five are got married. Laws have been formed deciding the minimum age of marriage but these laws have little effect on actual marriage practices. As per the Child Marriage Act, the age defined for a girl in India to marry is 18 years and above where for a boy it is 21 years. But according to UNICEF, 47% of girls are married by 18 years of age, and 18% are married by 15 years of age.

Yes, you read it correctly! Child marriage is also a major topic of concern in our country. Any formal marriage or informal marriage where bride and groom are under the age of 18 is considered to be a child marriage. Child brides are denied their right to decide for themselves when and whom to marry and are forced to engage in sexual relations, usually with older husbands. Customs and traditions are an integral component of many societies including Indian society.  Research says, each year 12 million girls are married before the age of 18. Child marriages have affected both boys and girls but child marriage is five times more common among girls than boys. Research says that the effects of child marriage on underage boys are small. However, child marriage affects girls’ health, education and social development. These consequences last well beyond adolescence. Girls are forced to marry early which leads to early pregnancy, when the child is a child herself that further causes death. According to The United Nations Population Fund (UNFPA), the major reasons for child marriage are poverty and economic survival strategies; gender inequality; sealing land or property deals or settling disputes; control over sexuality and protecting family honour; tradition and culture. Social insecurity has been a major cause of child marriage around the world because keeping young girls at home is treated as burden and a matter of fear for many parents. The sexuality of girl children is considered to be a matter of honour and reputation not only of the family but also of society, race and caste.  Whether we accept or no but rape, which is also very common in our country now a days, fears many parents from the acceptance of the girl later. But most commonly, extreme poverty and lack of resources make most daughters economic burdens on their family. Also, many parents have thinking that early marriage offers protection because of which they prefer child marriage. Parents feel that marriage provides their daughter with a sense of protection from sexual liberty and safety from sexually transmitted infections. Having this mind many girl children are married to older men that in fact lead them to even more risk. Not only this but, it is believed that if girls are married off early then it is easier to mould them as per the new culture. These girls are believed to be more likely to submit easily and accept the traditional gender norms without questions. Despite of having so many disadvantages to early marriage, it is still difficult to convince people within a community of its negative effects. Somehow neighbours, relatives, grandparents and Indian society pressurize the parents into getting their children married before their right age and parents can find it difficult to resist such pressures. The girls, unfortunately, are forced to practice child marriage and become a victim of this continuous cycle of subordination and dependency. Globally, the rates of child marriage are slowly declining but progress isn't happening fast enough. Child marriage has adverse effects, especially on girls like increased risk for sexually transmitted diseases, cervical cancer, malaria, death during childbirth, and obstetric fistulas. Child brides typically have very limited access to contraception and a lack of educational opportunities and have a higher risk of becoming victims of domestic violence, sexual abuse, and murder. In the age of being educated, many children in our country are trapped in marriages. Saddest part is that even if children want to get away from the tradition to being married before the right age, it is difficult because these girls often don't receive support from their families to say no and cultural, economic and religious norms. Not only in our country, but this is a global problem in many countries like Egypt, Afghanistan, Bangladesh, Ethiopia, Pakistan, India and the Middle East where young girls cannot go out of their homes except to work in the fields or get married. The Prohibition of Child Marriage Act, 2006 came into force on 1 November 2007 in India. In October 2017, Supreme Court of India declared ‘sex with a child bride’ as a crime.  Child marriage is a harmful traditional practice, a public health problem, and a violation of human rights. A marriage is considered to be null and void in the following circumstances:

1. When minor child is kept without legal guardian

2. When marriage is done by force

3. When the minor is sold off or trafficked or used for immoral purpose

Need to think on this and try to end child marriage but this will need efforts across all sectors and at all levels. Once married, especially, a girl’s world narrows dramatically. Child brides experience isolation from their family, friends and communities, as well as violence, abuse and exploitation. UNICEF works to end child marriage. It works to support for development and participation of adolescent girls, strengthening legal systems, strengthening services to help adolescents at risk of, or affected by, child marriage, particularly girls and more. However, on our part, as a society, we need to look on the major areas leading to child marriage and bad effects of it on the child. Most parents who marry their young children at an early age believe that their intentions are good, and religion and cultural traditions encourage this practice but unfortunately, these parents are often unaware of the health and psychosocial consequences of child marriage. We need to understand the importance of education to be provided to children rather than trapping them in child marriage and not letting them grow. Largely, there is a lack of awareness among the general public and even duty bearers about the legal regime related to child marriages. Ending child marriage involves tackling the many challenges that perpetuate this rights violation, such as gender inequality and discrimination which will happen only if we work as a society. Child marriage is associated with poor health outcomes and we must understand it. As parents, our focus should be on educating our children, particularly girls, empowering girls, stand up for girls’ rights. We must ensure that all present laws related to child rights/child protection are implemented without any discrimination and with a special focus on girls. Let’s make our better future of India by letting our children grow. Let us focus together on growth of our children rather than restricting them.