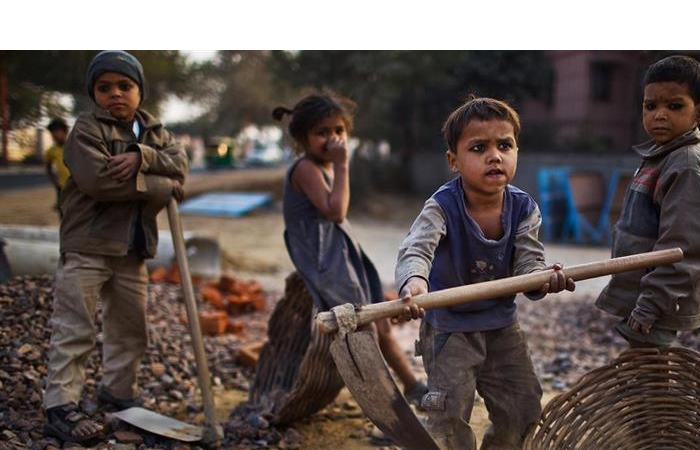 The employment of children in any kind of work which deprives them of their childhood and interferes with their ability to continue education is referred to as Child Labor. This practice is considered mentally, physically, socially, and morally dangerous and harmful. Child labor is in existence through most of the history. Most of the children work in agriculture, home-based assembly operations, mining, factories, and newsboys services. The primary causes of child labor are poverty and lack of schools.

A rapid increase in the industrial exploitation of labor is observed with the onset of the Industrial Revolution in Britain in the late 18th century. An important role is played by child labor in the industrial revolution where the children belonging to poor families are expected to work and contribute to the income of their families. Children received low wages as little as 10-20% of an adult male's wage. After many people raising voice against child labor, it began to decline throughout the second half of the 19th century. The industrialized societies face the lowering of child labor due to regulation and economic factors of trade unions.

Thousands of boys were employed in the early 20th century in glass making industries which is one of the most dangerous sectors. This sector includes intense heat of melting glass so children at work are exposed to this harmful heat which resulted in eye troubles, lung ailments, heat exhaustion, cuts, and burns. Many spheres including factories, mines, and home-based manufacturing industries were the major places where child labor was prevalent in the early 20th century.

What if a label of “Made by Children” is tagged on a neatly stacked sweater or on any department store shelf? Wouldn’t it be accurate for most of the major brands who encourages child labor for their own profits? According to the International Labour Organization, there are still 168 million child laborers and 21 million forced laborers across the globe. Conditions might have improved for some but workers at the bottom of the chain remain neglected. The making products we buy including shoes, jewelry, and clothes, involve an unregulated manpower in difficult-to-trace locations like private homes. These informal workers make the labor abuse most prevalent and exploitative. Yet because of certain adverse circumstances and for a living, millions of victims remain largely hidden.

Child labor is still common in many parts of the world. Major areas which involve child laborers are farming, dairy, fisheries, and forestry. Some children also work as tourist guides bringing in business for shops and restaurants. This practice predominantly occurs in rural areas and the informal urban sector. In Asia, it accounts for 22% and 32% in Africa. It is difficult to obtain the accurate present-day data of child labor due to disagreements between data sources.

There are various causes of child labor. They are divided into three major categories: Primary causes, Cultural causes, and Macroeconomic causes.

Primary causes: According to the International Labour Organization, poverty is the making and greatest cause behind child labor. For the sake of the family’s survival, income from a child’s work becomes crucial. Another major factor which contributes to child labor is the lack of meaningful alternatives like affordable schools and quality education. Children are forced to work as they find nothing better to do. Sometimes, schools are available but they are too far away and difficult to reach which makes it unaffordable for the families. Poor parents end up wondering whether going to school is really worth it or not.

Cultural causes: There are certain cultural beliefs in European history which have rationalized and encouraged child labor. According to the perception of some people, working is good for the character-building and skill development of a child. Many cultures which involve informal economy and small household businesses consider following of parents footsteps by children. Child labor in this scenario changes its meaning. It now means learning and practicing family trade from an early age. Girl education is also not given value in many cultures. They are simply expected to either handle household work or pushed into child labor like providing domestic services to others home.

Macroeconomic causes: Child labor is considered a serious problem majorly in five nations including India, Pakistan, Indonesia, Thailand, and the Philippines. This practice is increasing due to increasing demand and supply. The growth of the low-paying informal economy is amongst the causes of this practice. Other factors according to the scholars include inflexible labor market, size of the informal economy, the inability of industries to scale-up, and lack of modern manufacturing technologies.

According to statistical data, India in 2015 is home to the largest number of child laborers working in various industrial sectors. The largest sector among all where this is mostly practices in Agriculture. Children at early ages are forced to work due to unemployment, overpopulation poverty, and lack of education. An extensive research is done by many Indian social scientists and non-governmental organizations on the data of child labor and they concluded that India contributes to one-third of Asia’s child labor and one-fourth of the world’s child labor. The Indian government took extensive actions for the reduction of the number of children who are working by focusing on the importance of facilitating their proper growth and development. Some legal action taken by Indian government includes Geneva declaration of the right of children acts passed in 1924. This act was followed by the Universal Declaration of Human Rights in 1948. These acts and initiatives encourage major changes to the Indian workforce by prohibiting hiring children younger than the age of 14 years in hazardous conditions.