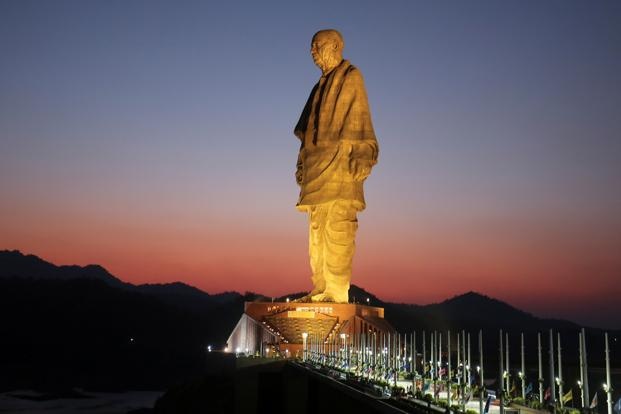 The Statue of Unity is known to be a tribute to the skills of Indian engineering, the largest statue is whooping the 182 metres (597 ft.) height featuring the iconic figure of Sardar Vallabh Bhai Patel who is known as the Iron Man of India, the statue is built at Narmada District of Gujarat at a river Island facing the Narmada Dam. It is so far the tallest statue in the world and which is also 4 times of the Statue of Liberty’s height, located at New York (USA). The statue was uncovered by Prime Minister of India, Shri Narendra Modi on October 31, 2018. While the statue will stands as a tourist spot glowing up the Pride of Nation but on the other hand there are many people who termed that incurring a huge cost Rs.2900 crores on it is nothing than a wastage of public money. Everything has a group in against and support thus relying on the arguments in favor and against the making of this statue has made a good amount of discussions in the social, economic and political areas, so now the ‘Statue of Unity’ had come out to become a seasonal topic of Group Discussion (GD) Round in the interview round of various competitive exams and GD-PI round. It is must for every citizen of the country to know about the Back ground, the Key Facts behind, favor and against on this hot topic ‘Statue of Unity which is lagging somewhere between Symbol of Pride or Wastage of Public Money.

While the background of the project is:

• The project of Statue of Unity was announced on 7 October 2010 by the government of Gujarat.

• The Gujarat government established the Sardar Vallabhbhai Patel Rashtriya Ekta Trust (SVPRET) for the construction of the statue.

• The Movement was initiated as a tribute to Sardar Vallabhbhai Patel who once united the country from parting apart, his contributions were remembered and this movement was taken as an initiative so as to support the construction.

• The movement showed a great response and helped in collecting almost 5,000 tonnes of iron. Initially the collected iron was for the sole purpose of constructing the statue, but later due to some construction issues it was decided that it will be used only in other parts of the project

• The then there was a Movement organized named as Suraaj petition which thereby means "good governance". The petition was intended to be signed which marked the signatures of around 20 million people and made out to be world's largest petition.

• The Statue of Unity’s Foundation stone was laid on the 138th Birth Anniversary of Sardar Patel by Sh. Narendra Modi, during the time when he was serving as Chief Minister of Gujarat on 31st October 2013, it is located on a river-island which is facing the Narmada Dam now popularly known as Sardar Sarovar Dam which is near Rajpipla, about 100 kms southwest of Vadodara city.

• The Statue of Unity and its nearby surroundings occupied approx. 2 hectares (4.9 acres) area. It is surrounded by a artificial lake of 12 sq. km area.

• The project to build the statue was taken by Larsen & Toubro (L&T), for Rs. 2,989 crore (US$420 million) for the construction, design and maintenance. The construction was flagged off on 31 October 2014 and completed in a span of 5 years in October 2018. It was designed by the Indian sculptor Sh. Ram V Sutar.

• The Statue was dedicated to Nation by Prime Minister of India Shri Narendra Bhai Modi on 31 October, 2018 on the 143rd Birth Anniversary of Sardar Patel

• Based on a Public Private Partnership model. The major part of the amount incurred was allotted by the Government of Gujarat. While the Government of India allotted 3 billion rupees for the dream project of Prime Minister in the budget from starring from2012 to 2016

History behind the movement: Sardar Patel was the first Dy. Prime Minister and Home minister of India after independence popularly Known as the ‘Iron Man of India’ who played an important role in the unification of many princely states that were dividing India into several parts. He united the country to form the modern political boundaries of India.

• Being termed as ‘Pride of Nation’, the Statue of Unity, which is currently the world’s highest statue is a true tribute to the great Iron Man of India, it is also considered as the first of its kind of tourist attraction which is currently based in our country.

• As it will attract tourist and income. It is so strongly built that it’s estimated to be established as it is for the next 1000 years. Thereby further contribution to the national income of India for approximately 10 centuries.

• Since the project is based on PPP model, the money spent by government is less than the amount spent by private enterprises.

• L&T incurred the major amount while only approx. 10% of the money spent was given by the Government.

• Through it people based in Narmada District and nearby localities will get self-employment opportunities and other employment with Hotels industry, transport and other related services

• Entire money that is spent on the construction of this statue is expected to be recovered back in the coming 35-40 years even if it attracts 10 lakh visitors each year.

• Government of India released almost Rs.200 crores for this project which thus attracted eyes of various people and political identities. They compared the need of project with some priority areas like education, women's safety and the agricultural schemes and criticized the huge cost of expenditure.

• L&T the biggest contributor had given a contract to a company named TQ Art Foundry which is a subsidiary of a Company of China, who was contracted for the bronze cladding and incurred huge amount. Highly criticized by the Congress leaders and some other parties. Later the government clarified that only 9 percent of the project was out-sourced from China.

• Social Activists have opposed primarily on the fact of suffering from calamities like cyclones and floods in many parts of the country. Thus instead of spending in the construction of statue, it should have been utilized for these problems.

• There are other things which require the most important for India – like health, education, safety and employment.

• Local Tribals were dislocated and their lands were acquired. The Tadvi tribe opposed it but was of no resort. However, the local tribals were given land compensation and were provided jobs even before the process of land acquisition.