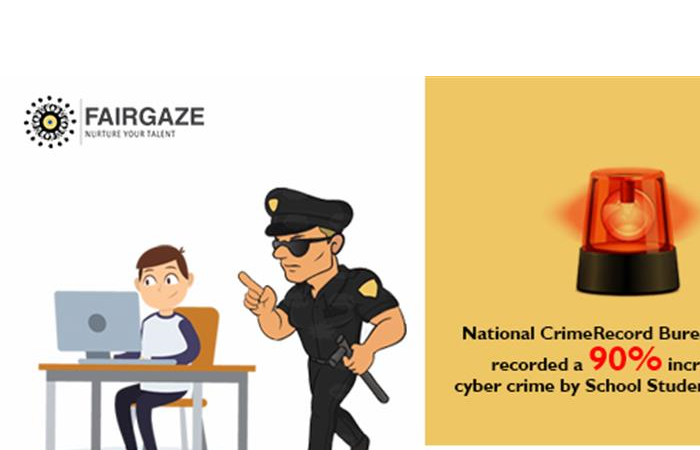 Internet has become an integral part of our lives. We cannot seem to be able to think of our lives without internet. Not just adults but internet has become necessary for the children as well. Children these days spend a good amount of their time on the net for their school projects or for entertainment. However, the internet has a very dark side to it which many of us especially adults have failed to understand. It is a very scary situation; the National Crime Record Bureau (NCRB) recorded a 90 percent increase in cyber crime by school students in the year 2016. Unfortunately it is continuously on the rise. Uttar Pradesh alone has reported over 90 percent rise in involvement of cyber related crimes by students since 2012. Out of the 812 students that were reported to be involved in the country 318 were from Uttar Pradesh itself which also happens to be the highest in the country. It is very saddening to see these students had to be arrested due to the nature of their crimes. The maximum numbers of students arrested are from the high school and colleges. The current generations of youth are champions of the internet. There is no way they can be kept away from the internet. However, the problem has reached this stage due to the absence of cyber hygiene, net etiquettes and ethics in our education system. Unfortunately, these are still to be completely incorporated into our education system. Added to this is the political system of our country where political parties have been providing free laptops pledging to empower the youth with  new age technology , further adding to provide smart phones as well. All of these have been done without doing any concrete work to change the cyber education policy. Apart from these the youth is also unaware of the offence that they are committing. Unfortunately the complete realm of cyber crime and punishment still remains shrouded under a mist with people having very less idea of what they are actually committing is a crime. Not just the one who is committing but the one at the receiving end too is unaware and hence many go unreported and the victim suffers in silence.

Cyber bullying is also a part which has become very sinister. Cyber Bullying generally means the act of harassing a fellow student or known person online by posting or sending mean messages or inappropriate morphed photos or messages. Cyber bullying is widespread in the schools with students engaging in Whatsapp groups and spreading rumors or targeting fellow students. The students resort to morphing photographs of the victim and upload them on social sites like Face book to harass the victim. Mostly the victim in fear of further aggravating the situation keeps quiet waiting the episode to die down. Or mostly these are handled internally with the school and the parents of the students resolving the issue with minor warning. However, there is one too many cases that are really disturbing. There is a sinister trend of revenge, sexual exploitation, blackmailing, extortion that have been reported done by students. The majority of cyber crimes against students are sexual in nature, trying to disrepute the victim, or an act of revenge. The recent murders by adolescents in schools and at home have shaken the country. It has been reported that children watch different kinds of crime related cartoons and play online games which provide them with the techniques that they end up either experimenting with in real life or taking a cue from them to actually bully someone.

Recently CBSE has recognized the menace and has sent a letter to the schools with suggestion of various steps to curb the menace. The Central Bureau of Secondary Education has taken it rather very seriously and the comprehensive letter sent to the schools also suggests permanent suspension of students found guilty of bullying including cyber bullying. Central Bureau of Secondary Education recommended putting up notices around the school campus to make it clear that bullying in any form either in person or cyber bullying will not be tolerated and will be punishable. Apart from this there are also plans of teacher training curriculum to include this issue.

One other area of concern is the online game challenge like the “Blue Whale” and “Momo”. These games command the youth to communicate with unknown people and they are challenged to do certain task and gradually the victim is pushed towards self harm and eventually, take their life that too mostly while recording it or going live with their suicide missions. These challenges have been reported across the globe many cases of suicide have been reported. These games are not publicly available. These administrators strictly control who gets access to the game. The Blue Whale game made its debut in Russia and has been reported to have killed more than 100 teenagers globally including India. Recently the creator of the game was arrested and sentenced to three years in prison for instigating teenagers into it and pushing them to suicides.

How do we safe guard our teenagers from the onslaught of these cyber bullying and cyber crimes? First and foremost as parents we need to educate ourselves. We need to research and keep ourselves aware of what comes under the purview of cyber crime or cyber bullying. Teach your children about Privacy. Make the children aware not to open messages from unknown persons. The new age children are smarter in many occasions than the adults who have been introduced to internet quite late in our lives. It has become a cause of concern for parents now. It is very important to chaperone children’s internet activities. There are few basic steps that every parent must be aware today because there is no way we can completely cut of internet from our children’s lives. First and foremost we should always teach our children to understand the term “Privacy”. We should make them understand that all aspects of his/her life are not to be shared. Secondly, parents should always keep an eye on the web explorer activity log to see if unknowingly the child is not being directed to site inappropriate for them. Mostly it has been seen that children unknowingly fall prey to these malicious activities. Every Browser has parental control settings and these should be wisely utilized. Mature content software should be installed to save the children from unknowingly venturing into inappropriate territories.

Teach your children not to be cyber bullies, instill in your child the phrase “Treat others as you want to be treated”. It is very important that we not just provide our children with all modern gadgets but also instill the very basic and fundamentals of good behavior. At this day and age parents need to be more open and stay connected to the children. Parents need to talk to them and look out for telltale signs of distress or aggression. We need to provide them with the educational resources and support so that they are able to navigate the complexities of personal relationships, deal with any form of internet bullying behavior and reach out in times of crisis.