What Is An Eclipse - All You Need To Know! 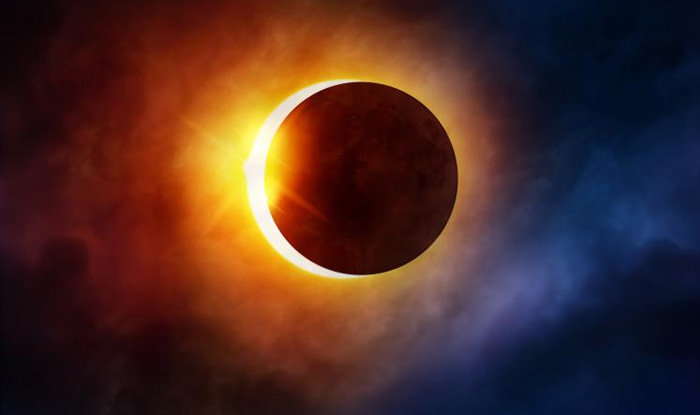 An eclipse is any phenomenon in which one astronomical object blocks the other partially or completely. This happens when one object moves completely into the shadow of another body. You must be wondering how that is even possible, considering the size of the heavenly bodies. Let's understand this using one of the most common examples: an eclipse caused when moon partially or fully blocks the sun.

Now, this itself sounds a little baffling, given that moon is so much smaller than the Sun. So, the idea of moon blocking the sun sounds a little perplexing. But just as you are able to place your small thumb and block a fully grown tree a little far away from you, in the same way, something as small as moon can obstruct the view of the sun.

• or, it can cast a shadow over the astronomical object

1. The Earth - our vantage point

3. The Third Object - that will be coming in the way to partially or completely block the view

There are major two kinds of eclipses - Solar Eclipse and Lunar Eclipse.

A solar eclipse happens when the moon comes between the Earth and the Sun. This blocks the rays of the Sun and casts shadows on some parts of Earth. Since, Moon is much smaller so the shadow can't cover the entire planet, so only some areas of the planet are covered. The area, however, keeps of changing because both the Sun and the Moon are in constant motion and even Earth continuously rotates around its axis while it's orbiting around the Sun and the Moon orbits the planet too.

There are 4 major types of solar eclipse that we experience. The magnitude of the eclipse, how of the Sun's disk is eclipsed, all of it depends on which part of the Moon's shadow falls on Earth.

1. Partial Solar Eclipse: This occurs when the Moon only partly obstructs the disk of the Sun. This casts only its penumbra on the planet.

2. Annular Solar Eclipse: This phenomenon brings out the ring of fire in the sky. In this eclipse, the Moon's disk is not able to fully cover the disk of the Sun. This causes the outer edges of the Sun to be visible. The partial covering leads to ring of fire.

3. Total Solar Eclipse: This is a little rare. The phenomenon happens when Moon completely blocks the Sun. This can only happen when the Moon is near perigee, point of the orbit of the Moon that is closest to the Earth. You will be able to watch the phenomenon only if you are in the path when Moon casts its darkest shadow, the umbra.

4. Hybrid Solar Eclipse: These are the rarest kind of eclipses are also called as the annular-total eclipses. They occur when the same eclipse changes from total solar eclipse to annular eclipse, or the other way around, while in the path of the eclipse.

You can only view the eclipse from within the area of the planet where the shadow of the moon will fall. The eclipse would look much bigger to you if you are closer to the center of the shadow's path. The solar eclipse is generally named after their maximum or the darkest point. The only exception would be the hybrid eclipse. Only a small area is able to experience the darkest point of the solar eclipse. Rest all the places and for most duration all the eclipses including total, annular and hybrid look like a partial solar eclipse.

Only On New Moon

As mentioned above, three astronomical objects are at play when a solar eclipse takes place i.e. the Earth, the Sun and the Moon. They must be aligned in a perfect straight-line or in astronomical terms, syzygy. This phenomenon occurs every month at the time of the New Moon.

So, why don't we see a solar eclipse every New Moon?

There are two reasons so as to why this happens:

• The New Moon should be near to a lunar mode. These nodes are two points in the solar system where plane of the orbital path of Moon around our planet meets Earth's orbital plane that it forms around Sun - called the ecliptic. This happens because there is an approximate 5 degrees angle between the moon's paths around the Earth.

• The Sun should also be close to a lunar mode where it manifests a perfect line with Moon and Earth to give rise to Solar Eclipse. This occurs around 6 months apart and lasts for an average of 34.5 days. This is called the eclipse season and you can only see the eclipse at this time.

You shouldn't ever look directly at the Sun without using any protective eyewear. This is because the harmful UV rays from the Sun can burn your retinas. This can lead to permanent damage or even blindness. You should always wear protective eclipse glasses or use a pinhole projector to watch a solar eclipse.

Lunar eclipse happens when the moon passes through the Earth's shadows. This can only occur during a full moon. For a total lunar eclipse, it is essential that all the three bodies are lined up perfectly. When the perfection is partial, we get no eclipse or partial eclipse. Just like there isn't any solar eclipse at every new moon, there isn't any lunar eclipse at every full moon. This is because Earth's orbit around the Sun is in a slightly different plane than moon's orbit around Earth.

A total lunar eclipse happens over the time - usually a few hours for the whole event. Here's how the phenomenon works:

• Earth casts two shadows on the moon. One is umbra, full and dark shadow and the other one is penumbra, partial outer shadow.

• The moon goes through these shadows in stages.

• The first and the last part is in the penumbral shadow. This stage is not noticeable.

• The best part is when the moon is in the umbral shadow. This happens in the middle of the event.

According to astronomers, ever since the moon has formed, it has been inching away from Earth. We have a perfect setup right now. Moon is located at the perfect distance from the planet so that the shadow of the Earth covers the moon completely. After a billion years, this won't happen.

• Total Lunar Eclipse: Full umbral shadow from the Earth falls on the moon. The moon is going to disappear completely but there will be a strange darkness. This could be easy to miss if you are not looking properly. Some sunlight to the Earth might be scattered, bent, refracted or refocused that would give it a dim glow.

• Partial Lunar Eclipse: Some of the eclipses are partial while even a total lunar eclipse will have a partial phase stage while it's reaching and going out of totality. During the partial phase, all the three bodies will not be perfectly aligned. This will cause the eclipse to look as if the shadow of the Earth is taking a bite out of the moon.

• Penumbral Lunar Eclipse: This is the kind of eclipse that doesn't interest many due to its less visibility. The moon will be in Earth's penumbral shadow. This is so less noticeable that you might not even know there is an eclipse unless you are a seasoned skywatcher.

The moon might appear to be red or coppery colored while it is inside the total portion of the eclipse. The red moon appears so because when the moon is in complete shadow of Earth, some light from sun that passes through Earth's atmosphere gets bent towards the moon. Red light bends easier and all the other colors of the spectrum gets either blocked or scattered.

How to Watch a Lunar Eclipse

Lunar eclipses are much easier to watch than solar eclipse. You do not need any protective wear. Simply go out, cozy up and enjoy. You might need telescope or binoculars at times. If it's winter time, don't forget to get some warm drinks and blankets for comfort.